Oct 6, 2017 4:17 AM PHT
Mars G. Alison
Facebook Twitter Copy URL
Copied
The defending champions await the winner between USJR and UC, while the USC Warriors are relegated to the battle for third place 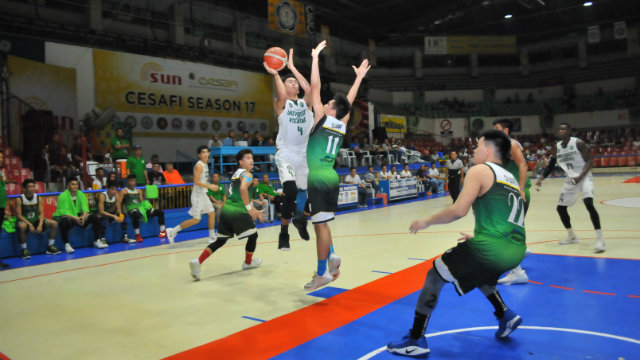 CEBU CITY, Philippines – Defending champions University of the Visayas (UV) Green Lancers remaining on track for their title retention bid by advancing to the finals with an 81-71 victory over the University of San Carlos (USC) Warriors in the CESAFI collegiate basketball tournament Thursday, October 5, at the New Cebu Coliseum.

The defending champions enjoyed a twice-to-beat advantage after ending the double round elimination at the top of the leaderboard with an 11-1 win-loss record. They suffered their only loss at the hands of the Warriors in their first game this season.

The Webmasters managed to keep their title bid alive after forging a rubber match against the Jaguars, who have a twice-to-beat advantage.

The winner will earn the right to face the Green Lancers for this year’s title while the loser will face the Warriors in a knockout game for third place.

Leading the Green Lancers to the finals was their Liberian import Bassieru Sackor who had a double-double with 16 points and 17 rebounds. Reigning MVP Rey Anthony Suerte chipped in 14 points and pulled 9 boards while Monic Soliva added 13 points and 6 boards. Two other Green Lancers also scored in double figures – Sheldon Gahi and Josue Segumpan both tallied 12 points.

The Green Lancers had a slow start allowing the Warriors to open with a 6-0 run before Soliva began UV’s scoring and was quickly followed with a trey from Segumpan and a drive from Suerte to shift the momentum to their side with a one point lead.

The Warriors were not about to get discouraged as they managed to wrest the lead back to their side again on the efforts of Victor Rabat and Arc Gabrielle Araw-Araw.

However, Suerte tied the game at 11-all by converting his gift shot and from there, Gahi and Tristan Ray Albina combined with him to give the Green Lancers a 9-point lead, 20-11, going into the second canto.

The second quarter was a Green Lancers show as they posted their highest advantage at 17 points, 30-13, on a basket by Segumpan.

But the Warriors refused to concede and managed to chip off 11 points from the Green Lancers’ lead to end with just a 6-point deficit, 32-38, at the halftime break.

The Warriors then stayed with the Green Lancers in the ensuing quarter thanks to 5 straight points from Kurt Ian Trangia which brought them nipping at the heels, 47-48, of the defending champions.

The game was tied two more times, the second at 58-all to end the third quarter.

The fourth quarter saw the Warriors only managing to score twice courtesy of  Kent Michael Cabañog in the first 5 minutes while the Green Lancers piled up their lead to as much as 13 points on a shot from long range by Suerte, 81-68.

Adding to the Warriors’ woes was the fouling out of Cabañog with 5 minutes left in the ballgame.

John Reel Saycon topscored for the Warriors with 18 points. He also managed 5 rebounds and 6 assists. Trangia added 13 points while Cabañog chipped in 10 points before fouling out.