Oct 6, 2017 4:55 AM PHT
Mars G. Alison
Facebook Twitter Copy URL
Copied
The Magis Eagles will gun for their fifth title while the Baby Lancers will try for their sixth title in the league 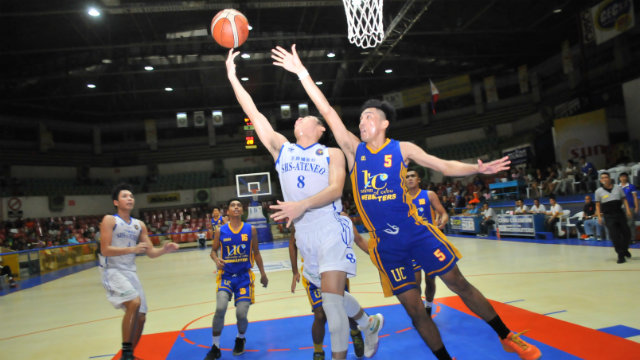 The Magis Eagles had a twice-to-beat advantage after finishing second during the elimination round having dropped only one in 9 games. The win over the UC Junior Webmasters earned them the right to face the University of the Visayas (UV) Baby Lancers who bagged an automatic entry into the finals following their 9-0 sweep of their elimination games.

This will be the Magis Eagles’ 7th trip to the finals, having made it to the championship round since the 2010-2011 season while the last time the Baby Lancers advanced to the finals was in 2014.

The Magis Eagles received much help from their big man Christian Manaytay who had a double-double performance of 14 points and 12 rebounds. Contributing much were Franz Ray Diaz and Patrick Wilson Yu, who each chipped in 10 points.

Two-time junior MVP Jed Cedrick Colonia may not have been effective in the scoring column, managing only 5 points, but he also made life harder for the Junior Webmasters by pulling down 11 boards.

After the initial 2-all tie at the start of the ballgame, the Magis Eagles could not distance themselves from a very determined Junior Webmasters team, only managing a lead of 7 points, 19-12, on Benedict Chua’s basket.

The Junior Webmasters quickly shaved off 4 points from the Magis Eagles advantage and went into the second quarter just 3 points behind, 16-19.

With Manaytay taking charge, the Magis Eagles once again started to pull away but 8 straight points from the Junior Webmasters with a trey from Dexter Villasan and 4 points from Lovie Jay Señagan shifted the game’s favor to UC.

The game was deadlocked 3 times more in the final quarter, the last at 60-all. Orquez then gave the Junior Webmasters a slim one point lead, 61-60, by splitting his charities with 3:55 left on the clock.

However, it proved to be the Junior Webmasters’ last score of the ballgame as Manaytay and Diaz pulled the Magis Eagles to 64-61.

The Junior Webmasters had plenty of chances to force overtime or even win the game to keep their title bid alive but Allan Dave Peligrino bungled his 3 charities which he earned when Manaytay fouled him from the 3-point area. Villasan committed a turnover i side the final two minutes of the ballgame and Orquez missed his trey attempt with 5.7 seconds remaining.

The UC Junior Webmasters, who finished as the runner-up last season, bowed out of the tournament at third place. At fourth place is the

University of San Jose Recoletos (USJR) Baby Jaguars whom the Junior Webmasters booted out in a knockout game which opened the semifinal round for the high school division.

Game 1 of the best-of-3 finals for the CESAFI junior title will be Tuesday next week, October 10.