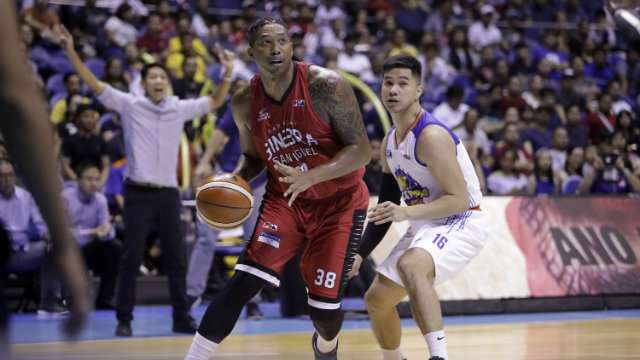 MANILA, Philippines – Despite committing lapses down the stretch, Barangay Ginebra San Miguel nipped the TNT KaTropa in a 106-103 Game 3 thriller to take a 2-1 lead in their best-of-five semis clash of the 2017 PBA Governors’ Cup at Smart-Araneta Coliseum on Friday, October 6.

With Ginebra leading 106-100 with only 25 seconds remaining, it looked like the game was already over for the KaTropa but Joe Devance missed a fastbreak layup that paved way for TNT import Glen Rice Jr knocking down a trey, 103-106.

The Gin Kings still had a chance to make it a two-possession game. However, Scottie Thompson missed both of his free throws and Japeth Aguilar tapped it out of bounds which gave the KaTropa 7 seconds to shoot for a game-tying triple.

Fortunately for Ginebra, Rice Jr missed his three-point attempt in front of the outstretched arms of Justin Brownlee.

Amid the crucial miss, Devance starred for the Gin Kings with a team-high 20 points, highlighted by back-to-back putbacks that lifted Ginebra 105-100.

“Both teams played well and it just came down to the last shot and it went to our favour. But the series isn’t over, the series isn’t won. It gave us the lead, which is nice to have, but certainly not a safe one especially against a team like Talk N Text,” said Ginebra coach Tim Cone.

Amid the crucial miss, Devance starred for the Gin Kings with a team-high 20 points, highlighted by back-to-back putbacks that lifted Ginebra, 105-100.

Greg Slaughter regained his form with a 19-point, 6-board output while Thompson and Brownlee combined for 34 points and 25 boards.

There was huge disparity in free throw attempts as Ginebra had 43, 30 of which it buried, while TNT only had 14, 12 of which it sank.

Rice Jr dropped a herculean 44-point, 20-rebound and 6 assist display in the losing effort while Jayson Castro flirted with a triple-double with 17 points, 9 assists and 9 rebounds.

Game 4 will be held on Sunday, October 8, at the same venue.