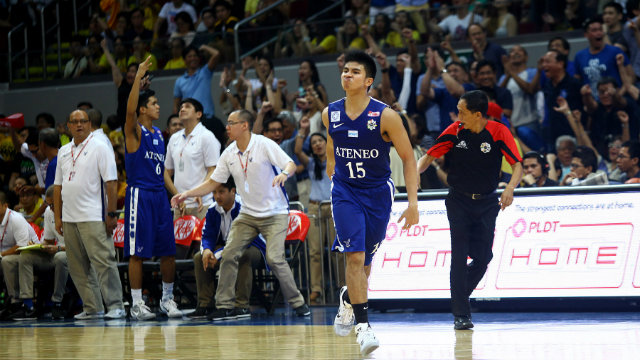 MANILA, Philippines – Two of collegiate basketball’s most prolific stars have declared themselves available for the upcoming 2017 PBA Draft.

Ravena has yet to file his application for the draft as of Monday afternoon, Marcial tells Rappler.

Teng and Ravena, who became teammates for the Chooks-to-Go Pilipinas team that saw action in the FIBA Asia Champions Cup in Chenzhou, China weeks ago, are both projected to go in the top 5.

Teng, a two-time champion and a two-time Finals MVP in the UAAP, continued his fine play in the semi-pro ranks by averaging 23.2 points, 8.2 rebounds and 4.4 assists for the AMA Online Education in the Aspirants’ Cup of the 2017 PBA D-League.

Ravena, meanwhile, starred for Chooks-to-Go with a team-high 20.6 points per game and dropped a whopping 76 points, 11 rebounds and 8 assists yesterday in the UAAP Goodwill Games.

The PBA has set a deadline of October 12 for Philippine-born players to apply for the draft, which takes place October 29 at Robinsons Place Manila in Ermita on October 29. The mandatory PBA Draft Combine will take place October 23-25, and the final draft list will be announced on October 27. – Rappler.com