U.S. booted out of World Cup after stunning loss to Trinidad

Oct 11, 2017 3:04 PM PHT
Agence France-Presse
Facebook Twitter Copy URL
Copied
A sportswriter says the shock defeat, which denied them a World Cup ticket for the first time since 1986, as "most surreal and embarrassing night in US soccer history" 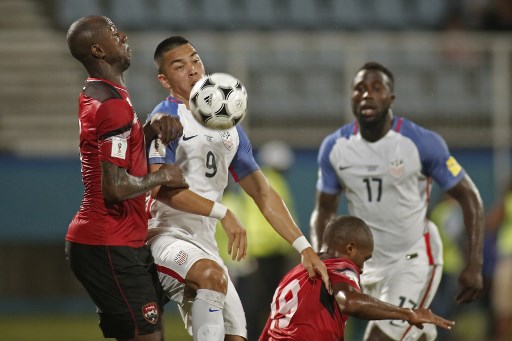 COUVA, Trinidad – The United States failed to qualify for the World Cup for the first time since 1986 on Tuesday, crashing to a shock 2-1 defeat against already-eliminated Trinidad and Tobago.

In a result that will be viewed as a catastrophe for soccer in the United States, Trinidad took all three points via an Omar Gonzalez own goal and a superb strike from Alvin Jones.

US star Christian Pulisic pulled a goal back in the second half, but the increasingly desperate Americans were unable to find another to rescue their hopes.

Their exit was confirmed by results in Tuesday’s other CONCACAF qualifiers, where Panama booked their place at the World Cup for the first time with a 2-1 win over Costa Rica in Panama City.

Honduras then snatched fourth place in the table with a 3-2 win over Mexico, which had already qualified.

The Hondurans will now face Australia in a two-legged playoff next month for a place in the finals.

But the shock of the night was without a doubt the US failure at the final hurdle.

Shellshocked US coach Bruce Arena said his team had “failed.”

“Clearly we are very disappointed. We had everything there for us today. No excuses for us not getting a second goal and coming away with at least a point,” Arena said.

“It’s a blemish for us. We should not be staying at home for this World Cup and I take responsibility.

‘We failed on the day’

“It never mattered to us the scores of the other games. We failed on the day. No excuses. We failed today. We should have walked off this field with at least a point.”

Arena’s side had needed only a draw at the Ato Boldon Stadium to secure at least a playoff spot.

After thrashing Panama 4-0 last Friday, the Americans had arrived in the Caribbean confident of securing the result needed to extend a proud record of qualifying for every World Cup since 1990.

Yet it started to go wrong for Arena’s men after 17 minutes when Gonzalez’s sliced clearance looped high and over the stranded Tim Howard to put Trinidad and Tobago up 1-0.

It got worse just after the half-hour mark when Alvin Jones produced a goal out of nothing to double the home side’s lead.

Gathering the ball on the right flank, roughly 35 yards from goal, Jones let fly with a ferocious shot which flew past Howard to make it 2-0.

Pulisic then gave the US hope with a deflected shot soon after half-time to make it 2-1.

As the changing scores in the other games began to filter through to the American ranks, the US became increasingly desperate.

But despite the desperation, Trinidad and Tobago held firm for a famous win that is likely to trigger a prolonged inquest in US soccer.

Grant Wahl, the soccer writer for Sports Illustrated, described the loss as the “most surreal and embarrassing night in US soccer history”, accusing the squad of complacency.

“This was a team with players acting like they thought they had already qualified for the World Cup, and it showed,” Wahl wrote.

The exit is likely to draw scrutiny to Arena’s position as well as that of Sunil Gulati, the head of the United States Soccer Federation.

Gulati had rolled the dice by sacking Jurgen Klinsmann early in the qualifying campaign following defeats to Mexico and Costa Rica, replacing him with Arena.

However, Tuesday’s failure makes it likely that serious questions will be asked. Arena warned against snap decisions.

“To make any kind of crazy changes would be foolish,” the veteran coach warned.

Gulati also sought to damp down calls for a wide-ranging post-mortem.

“You don’t make wholesale changes on a ball being two inches wide or two inches in. We’ll look at everything,” he said. – Rappler.com