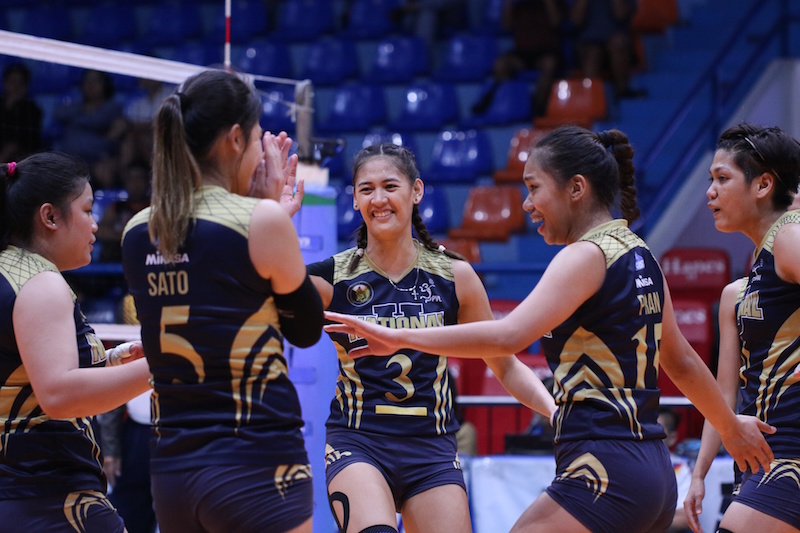 MANILA, Philippines – The National University Lady Bulldogs remained in tip-top form as they toppled the Far Eastern University Lady Tamaraws, 25-22, 21-25, 25-18, 26-24, to draw first blood in the PVL Collegiate Conference finals at the Arena in San Juan on Wednesday, October 11.

After trailing 15-21 in the final set, the Lady Tamaraws gave the Lady Bulldogs a major scare as they tied the game at 22-all courtesy of a 7-1 run marked by 4 NU errors.

Both teams exchanged errors that led to a 24-all deadlock but FEU failed to get its bearings back as NU took the set following a Heather Anne Guino-o service error and a Celine Domingo mishit.

Despite the win, NU coach Babes Castillo the team still has not found its “balance.”

The Lady Bulldogs had the chance to take a 2-0 set lead earlier as they took a 20-16 advantage in the second set but FEU rallied back with a 9-1 spurt, highlighted by 3 straight aces from Jeanette Villareal, to tie the match.

Jaja Santiago starred for the Lady Bulldogs with 21 points, spiked by 15 attacks, 4 blocks and 4 aces, while Risa Sato added 12.

Audrey Kathryn Paran fired 11 in the win while Jorelle Singh and Aiko Urdas conjoined for 17 markers.

Czarina Carandang paced FEU with 17 points while Villareal and Tony Rose Basas chipped in 15 and 10, respectively.

Game 2 of the finals will be held on Saturday, October 14, at the same venue. – Rappler.com