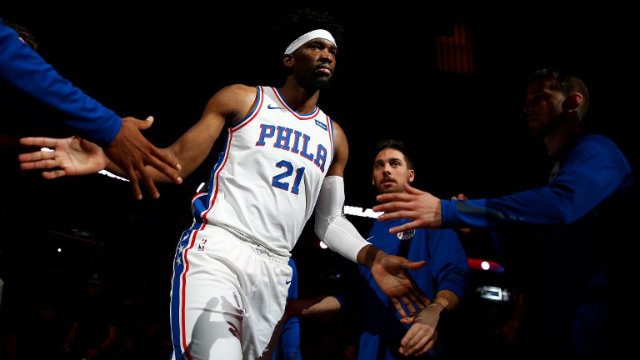 MANILA, Philippines – After a routine NBA pre-season contest that saw the Philadelphia 76ers waste the Miami Heat 119-95, both teams found more fire than expected from the game as their respective star centers trade barbs across social media platforms.

It all started with a fan tagging both big men on Twitter while giving a piece of his mind regarding Joel Embiid saying Hassan Whiteside can’t guard him:

Whiteside gamely got on board the roast train, replying:

The media won’t show that

Meanwhile, Embiid, who has established himself as a mainstay in social media, took notice and launched a 3-hit combo, first talking about Whiteside’s foul troubles…

Dude they had to take your ass out or you would’ve fouled out in 5 min… And we’re talking about Preseason, not regular season….. #Softy https://t.co/IAIBDDypFK

And keep caring about stats and not your team success….. your +/- was ass @youngwhiteside #Softy

…all before giving a side burn to Kevin Durant, who was busted about a month ago using multiple alternate accounts to answer back to haters:

My bad y’all , I thought I was using my burner account #TheProcess

Then Whiteside retaliated where it, quite literally, hurts – Embiid’s injury history.

@JoelEmbiid 31 games in 3yrs Hopefully I get to see you regular season #SolarEclipse #EmbiidEclipse https://t.co/iaFfK3h3V6

But as an unofficial social media king, Embiid turned to Instagram to deliver the final blow.

Great way to end preseason with a win.. it’s about to get real now.. Thanks for all the love in Kansas.. My location is EXTREMELY ASS #TheProcess

Don’t understand the caption? Check where he checked in. Brutal.

These two Twitter-feuding men are Miami and Philadelphia’s respective futures, with both locked in multi-year, multi-million dollar max contracts. The battle may be over, but the war has clearly just begun, as long as Embiid can log more minutes than tweets. – Rappler.com