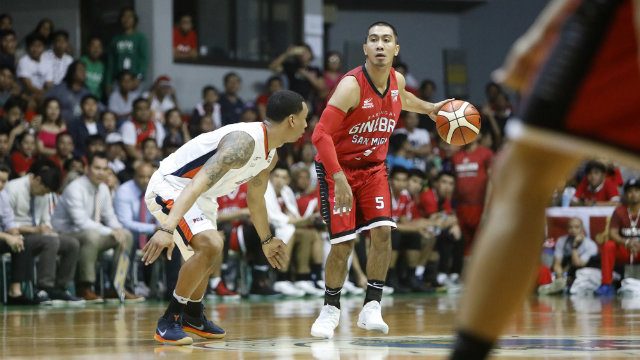 MANILA, Philippines – Since their days together as part of the Alaska Aces, Barangay Ginebra head coach Tim Cone is well aware of how clutch of a performer LA Tenorio is.

So when Ginebra needed a small lift to fend off the Meralco Bolts in Game 2 of their best-of-7 finals series Sunday, October 15, Cone knew “The General” was going to take over crunchtime.

With Meralco still in striking distance, 76-79, Tenorio, unfazed, shrugged off Chris Newsome’s outstretched arms and buried a dagger trey with the shot clock winding down to give the Gin Kings a comfortable 82-76 advantage with 1:08 left in the game.

Seven seconds later, the veteran playmaker stole the ball and then went on to ice his free throws, giving Ginebra enough breathing room en route to an 86-76 win and a 2-0 series lead.

“He’s done that so many times that we come to expect it and it was an amazing shot and that was the thing that turned the whole game around. It was anybody’s game until he hit that shot,” said Cone of his prized floor general.

Despite Ginebra import Justin Brownlee flirting with a triple-double with a statline of 19 points, 15 rebounds, 7 assists and 2 steals, it was Tenorio who shone brightest in the limelight as he scored 10 of his 14 points in the payoff period.

But what makes Tenorio’s performance even more impressive is the fact that he is playing with a bummed elbow on the side of his shooting hand and Cone was just as fascinated as the fans who saw Tenorio, the smallest in the team, stand tallest when the game was on the line.

Tenorio is set to undergo surgery for his elbow at the end of the conference but he is having some doubts whether he still needs to since he has been on a roll in the playoffs.