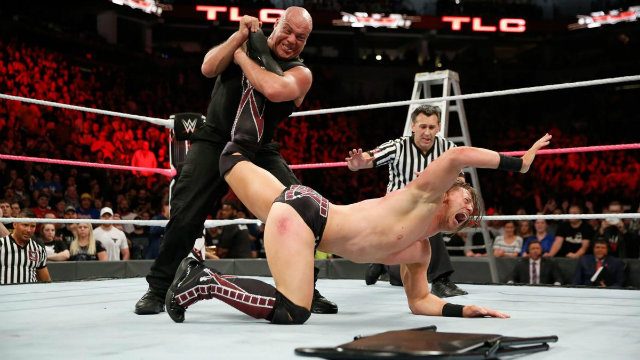 Over 11 years after his last match for World Wrestling Entertainment, the Olympic Hero was back in a WWE ring, not as an on-screen authority figure but as an active competitor. It had been painfully obvious how much Kurt Angle would prefer to be tossing other wrestlers instead of holding a microphone, and a sweeping outbreak of an unspecified viral infection that left several members of the WWE roster out of action was the opening to do so, according to an ESPN report.

Angle, donning The Shield’s SWAT team outfits instead of his trademark red, white, and blue singlet, did not take too many serious bumps outside of being put through a table by a Strowman running powerslam. The match’s agent probably had to work hard to talk Angle out of an insane moonsault spot off a ladder, almost certainly.

It wouldn’t be an Angle nostalgia-fest without plenty of Angle Slams, German suplexes and ankle locks, and even a Shield Bomb as a hat tip to the recovering Reigns. It was all the more appropriate that Angle was the one who made the pinfall on The Miz.

“I never thought it would feel this good. It’s been 11 years since the WWE Universe has seen me wrestle,” Angle said afterwards on WWE RAW Talk.

Angle, who was inducted into the WWE Hall of Fame in March, has been the commissioner of the RAW brand since April, doing his best to get over goofy storylines like Jason Jordan being his son.

The match was the first for Angle since August 2006 when he wrestled Sabu on the now-defunct ECW. Angle had cited recurring injuries as his reason for leaving the WWE, but he’s also gone through public battles with addiction, telling ESPN in 2016 that he was taking 65 Vicodin pills per day at one point, and had been arrested numerous times for driving under the influence.

He said in a September 29 article on Fox Sports that he had not at that point taken the physical exam for in-ring action and was in the process of proving to WWE CEO Vince McMahon that he could be trusted again.

Any questions about whether he can still put on a classic match would be easily dismissed by watching his series of matches against Cody Rhodes a year ago which were perhaps the best wrestling in the world during that period.

Amazingly, despite his time away from the company, the 48-year-old Angle was not the youngest man in the match. That designation belonged to Kane, the 50-year-old Ron Paul acolyte who returned to the WWE after a 10-month absence just a week ago.

And if Angle making his in-ring return isn’t enough to get you to watch a replay of TLC, there was also a first-ever one-on-one match between former Bullet Club leaders AJ Styles and Finn Balor that was just too sweet.

Who knew viruses could book pay-per-views so well? – Rappler.com