Rafael Nadal pulls out of ATP Finals after Goffin upset 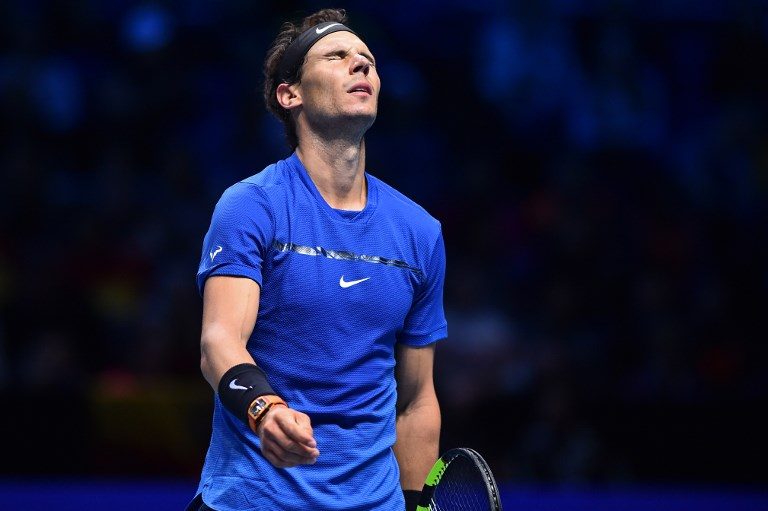 LONDON, United Kingdom – Rafael Nadal pulled out of the ATP Finals on Monday, November 13, admitting he had lost his fitness battle after crashing to defeat in 3 sets to David Goffin in a thrilling encounter.

The Spaniard came into the tournament with doubts swirling over his fitness after pulling out of the Paris Masters with a knee injury.

Initially he showed no obvious ill-effects during a rollercoaster round-robin encounter in front of a supportive crowd but eventually his injury caught up with him and forced him to admit his season is over.

“No, I am off,” said Nadal. “My season is finished. Yeah, I had the commitment with the event, with the city, with myself. I tried hard. I did the thing that I had to do to try to be ready to play. But I am really not ready to play.”

“Is about the pain,” he added. “I cannot hold with enough power to keep playing. I tried, but seriously it was a miracle to be very close in the score during the match. It really doesn’t make sense.”

Nadal said he would work hard to be ready for the start of the next season.

“I know what I have to do,” he said. “I know all the things that happened in the past when I had these things, and I know the treatment that I had to do. I know the periods of time that I need to work. Then if the treatment works or not, we will see.”

Nadal, 31, struggled to find his range early in front of a raucous crowd rooting for him and was broken twice in the first set by the Belgian 7th seed, who had lost their previous two encounters.

The Spaniard appeared to have earned a psychological edge when Goffin double-faulted while serving for the set and the match went into a tie-break but the Belgian re-found his focus to come out on top.

The second set went with serve until the 8th game, when Goffin broke to earn a chance to serve for the match, only for Nadal to break back.

Goffin had a golden chance to seal the match in Nadal’s next service game but failed to put away a mid-court forehand on match point and the left-hander leveled at 5-5.

The Belgian composed himself to hold and then earned 3 more match points but Nadal, showing incredible grit and playing right at the limit, saved all 3 to take it to another tie-break, which he won.

In the decider, Nadal appeared to feel discomfort in his right knee as he went two breaks down but still he refused to admit defeat, recovering a break before eventually succumbing.

“It was a tough fight until the end,” said a relieved Goffin.

“Rafa is one of the strongest players mentally on the tour. I am so happy to finally find the key to win this match. It is so special to do it here.”

Nadal has won 75 singles titles in his illustrious career, including 16 Grand Slams and 30 Masters events but he has yet to triumph at the ATP Finals, played on quick indoor courts rather than his favored clay.

The elegant Bulgarian had the edge for most of an enthralling contest of one-handed backhands but admitted he felt “pretty nervous” in his first appearance at the ATP Finals.

The 6th seed, who has enjoyed the best season of his career, looked wobbly as he blew his chance to serve for the match at 5-4 in the decider only to hit back immediately as Thiem himself faltered and going on to seal victory on his 3rd match point.

The ATP Finals feature the top 8 fit male singles players and doubles teams that have accrued the most points throughout the 2017 season. – Rappler.com