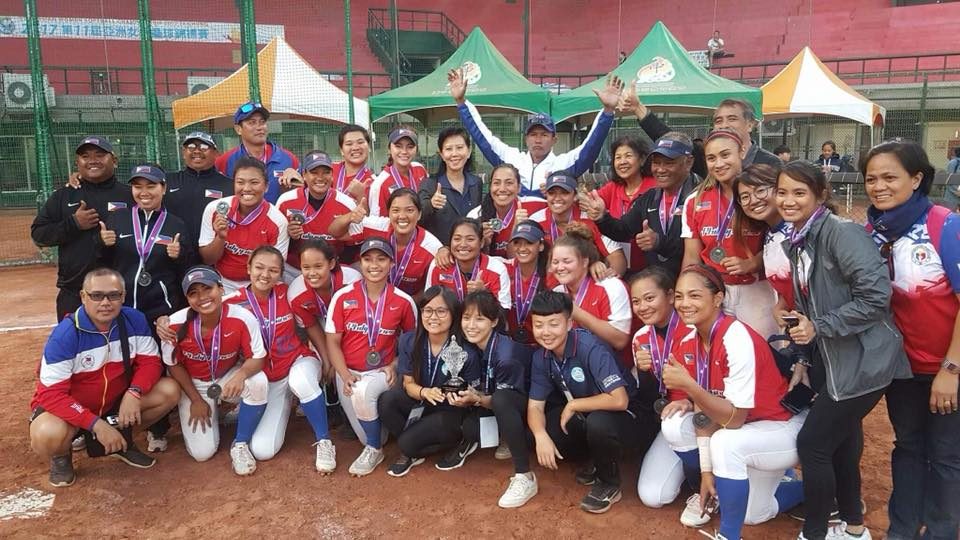 MANILA, Philippines (UPDATED) – The Philippine Blu Girls settled for a silver medal after their loss to Japan, 0-7, in the finals of the 11th Asian Softball Championships held in Taichung City, Taiwan.

The Blu Girls had a triple-header playing day against China, Chinese-Taipei and Japan on Monday, December 4. The Philippines faced Chinese Taipei in the bronze medal match and won, 5-3, to catapult themselves to the finals vs world No. 1 Japan.

“I’m so elated with RP Blu Girls’ performance in this ongoing Asian Women’s Softball Championships. Their wins against world number 6 China and World number 9 Chinese-Taipei prove that their wins these summer against powerhouses such as world number 3 Canada, number 4 Australia were no flukes,” said Amateur Softball Association of the Philippines (ASAPHIL) president Jean Lhuillier in a Facebook post.

“I’m so excited about this team and I think they have a legitimate chance of being one of only 6 teams who’ll play in the 2020 Tokyo Olympics.”

After defeating Thailand, 5-0, on Saturday, December 2, the Blu Girls advanced to the playoffs, securing them a slot in the 2018 Asian Games in Jakarta, Indonesia, 2018 World Softball Championships in Tokyo, Japan.

“The first goal was to qualify for the Asian Games and the World Championships because those are the qualifiers for the Olympics. But don’t want to just stop there. It’s not enough to just qualify. We had to have a podium finish,” said captain Cheska Altomonte.

“So it did help boost the morale of the team [for their match against Japan], but we have high hopes and high expectations for ourselves and for the team.”

Blu Girls captain Cheska Altomonte said that team went into the tournament to “prove something.” | via @beebeego09 pic.twitter.com/BlbpMOLj3h

The national women’s softball team continues their bid for the Tokyo 2020 Olympics by starting their 2018 with two other major competitions that will allow the Blu Girls to continue building their team. According to head coach Randy Dizer, they will also be participating in the World Cup in California and Canada Cup in Surrey.

The PH Blu Girls will be preparing for 4 major tournaments in 2018: World Cup in California, Canadian Cup, World Championships in Chiba, Japan and the Asian Games in Indonesia. | via @beebeego09 pic.twitter.com/ltdFW8DNio

The team will still be a mix of both the local and Filipino-American players as they enter into these tournaments. Despite being based in the United States, Fil-Am second base player Chelsea Suitos reassured that each member of the team will continue to individually hone their skills that will prepare them to don the Philippines’ colors once again.

“We come together, we hit a few practices in a way that we did this time. We’re expecting the same kind of performance.”