What did LeBron James tell Lonzo Ball after the game? Only they know

Dec 15, 2017 3:05 PM PHT
Rappler.com
Facebook Twitter Copy URL
Copied
LeBron James takes time out to chat with Lonzo Ball, the Lakers rookie with the pressure of the world being heaped on his shoulders 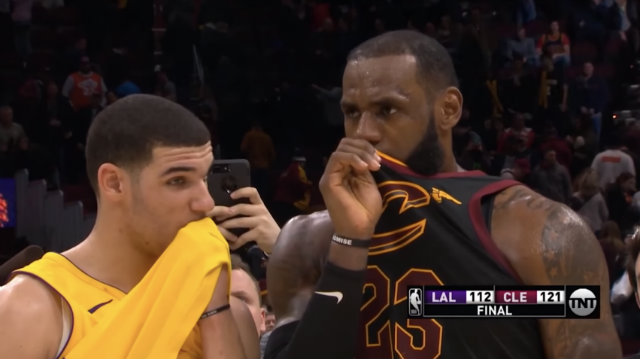 MANILA, Philippines – Give all the credit to TNT’s Kristen Ledlow for asking the one question everyone had in mind following the final buzzer to the Cleveland Cavaliers vs Los Angeles Lakers game, but LeBron James wasn’t letting the secret out of the bag.

James showed love to the Lakers’ young core players following the Cavs’ 121-112 win Thursday, December 14 (Friday Manila time), and had a few words for Lonzo Ball specifically. The two covered their mouths as they spoke to throw off lip readers, like a scene out of the movie Casino, prompting fans to take their own guesses on social media about what they were saying.

“I didn’t tell him anything, it’s not for everybody. There’s enough noise out there already with ‘Zo, and it’s not for me to discuss,” said James, who moved to sixth all time in NBA triple doubles with his 59th with 25 points, 12 rebounds and 12 assists.

“He has a bright future like I said the other day in my quotes, and they’ve got a bunch of young guys and they don’t stop running, I’ll tell you that. It’s a good win for us.”

People were already paying attention to the matchup between the two ball handlers after a video went viral before the game of a hospitalized child asking LeBron to dunk on Lonzo, to which James responded “I got you.” That didn’t come to fruition, though Ball’s teammate Brook Lopez narrowly avoided that fate as he ducked out the way of an oncoming James, and then subsequently air balled a pair of free throws.

Ball, the Lakers rookie playing against James for the first time, finished with 13 points, 11 rebounds and 8 assists.

Brandon Ingram scored 26 points to lead the young, energetic Lakers, who seized an early lead before the Cavaliers found their range.

Cleveland scored 100 points for the 22nd consecutive game, winning for the 16th time in 17 contests.

“Tonight the difficult challenge was the way they were kind of spreading the floor, running up and down,” James said. “But if we defend, if we share the ball, move the ball, we’re going to give ourselves a good chance to win every night.” – with reports from AFP/Rappler.com