Dec 15, 2017 7:10 PM PHT
JR Isaga
Facebook Twitter Copy URL
Copied
Even as reporters pressed him for answers, LeBron James is keeping what was said to Lonzo Ball a secret between them 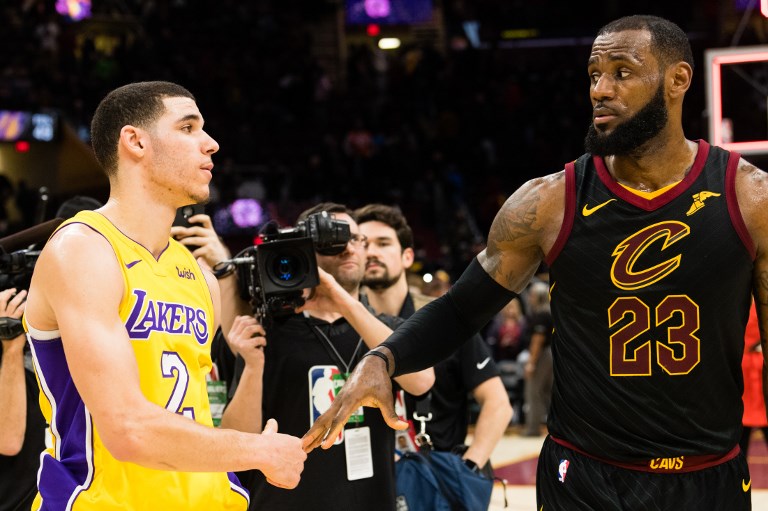 MANILA, Philippines – Of all NBA players, LeBron James is easily the one who can relate most to Lonzo Ball.

Fifteen years ago, the then 18-year-old James was cast out into the cold world of superstardom. As early as his sophomore season in St Vincent-St Mary High School when he was 15, he was already selling out local arenas. Before he even got drafted, he was already labeled “The Chosen One.” After he was picked first overall by the Cleveland Cavaliers, people chanted “Overrated!” mere moments after he achieved one of his lifelong dreams, which was to play in the best basketball league in the world.

Fifteen years later into the present, LeBron James finally faced off against Lonzo Ball, another rookie beset with another world of expectations. No, Ball was not christened as the second coming of Magic Johnson, but his father LaVar did tell the world he was better than Stephen Curry, among a lot of other things. Naturally, the volatile hatred for LaVar spilled over to Lonzo, and he was scrutinized more than it was fair to do so. Every miniscule failure, every drop in shooting percentages and every blown play was given the spotlight.

The difference here with Lonzo compared to LeBron was that LeBron actually delivered. He continually shut up the critics from day one, which is simply not the case with Ball, who has since buckled under the weight of the world on his shoulders.

In a rare moment after Friday’s win (Manila time) of Cleveland over the Los Angeles Lakers, James called Ball over and talked to him with his jersey covering his mouth so no one could read his lips and try to interpret what he was saying. All people could get were a series of nods from the 20-year-old rookie.

(READ: Hospitalized kid’s wish to LeBron James: ‘Can you dunk on Lonzo for me?’)

Of course, after the game, reporters asked the 4-time Most Valuable Player about what he said to the young Ball. Instead, this is what they got.

“[Lonzo’s] said over and over since he was growing up who he modeled his game after,” he said. “Who was his favorite player? It was me, and I was humbled by that, so when I wished him a happy birthday it was kind of a salute back to him.”

But reporters pressed on about the private conversation: “Were you mentoring him?”

After that conversation, controversy still followed. Now, the rumor mill on James leaving Cleveland for Los Angeles next summer just gained more heat. After all, he just bought his second home over there in Hollywood just this month.

Even after what was supposed to be small talk, scrutiny just didn’t go away. But that’s stardom for you, especially in the NBA. Maybe James just told Ball to tune out the noise because from now on, it’ll never go away. At the very least, Ball can rest easy knowing that not everyone is against him after all. – Rappler.com