Canaleta says ‘no revenge’ in clutch performance vs former team 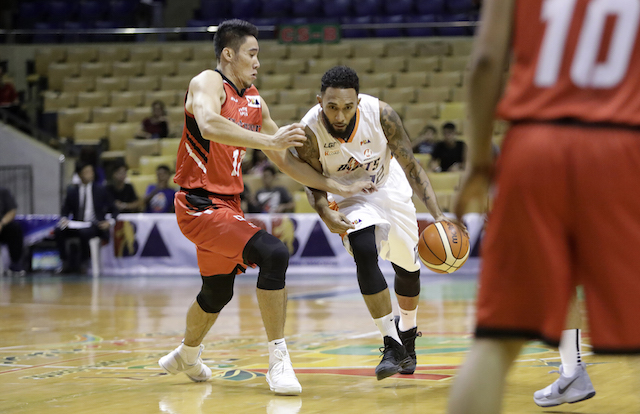 MANILA, Philippines – Journeyman KG Canaleta showed why he remains a commodity in the PBA with a vintage game of 25 points and 9 rebounds for the Meralco Bolts against the Blackwater Elite, his former team.

The 12-year veteran, who was signed to a one-year deal by the Bolts in the offseason after his contract with Blackwater expired, was on fire throughout the game as he buried 5 of his 9 attempts from long range, including a triple with 11.3 seconds remaining that pushed Meralco to a 103-98 season opening win.

But the Tarlac City native clarified he wasn’t out for revenge against the Elite, whom he helped almost pull off an upset against the Bolts in the quarterfinals of the 2017 Governors’ Cup.

(I was not planning revenge or anything. Every game, you need to be motivated. But the difference here is it was against my former team. You can say that it just doubled my motivation.)

Canaleta did not need much time to adapt to the Bolts’ system, especially since he has been adjusting for most of his PBA career after being part of 9 different squads. Also, he had already played for Meralco coach Norman Black when they were both part of Talk ‘N Text in 2014.

But the 5-time Slam Dunk king downplayed his big game, saying his teammates just found him in open spots.

(I just get open that is why we had good ball movement. Everyone contributed, it just happened that I was getting open.)

Black, who is missing the services of Cliff Hodge and Ranidel de Ocampo due to injuries, is glad to have Canaleta carry the scoring cudgels.

“I’d like to just give special mention to KG who I thought was exceptional tonight, scoring and rebounding. He’s going to be a very good addition to our team,” said the multi-titled tactician. – Rappler.com