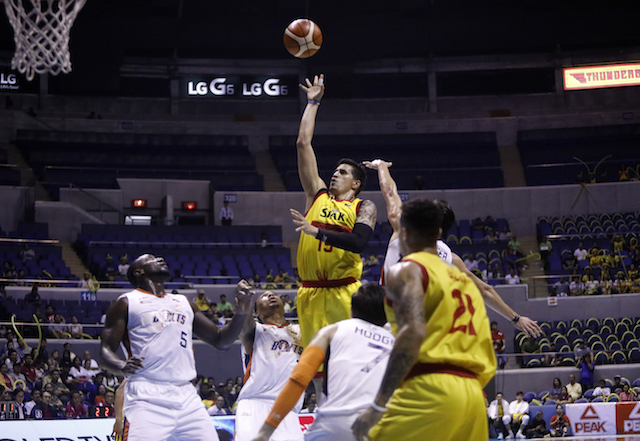 MANILA, Philippines – Marc Pingris is coming off kidney stone removal surgery and is uncertain to see action in the PBA’s Christmas Clasico on Monday, December 25. But if he would have it his way, of course, he would want to play.

“The Pinoy Sakuragi” had just been discharged from the hospital last week. He admitted the operation has taken him “back to zero,” casting a shadow on his chances of providing the inside presence the Magnolia Hotshots will need against Barangay Ginebra.

The Hotshots missed the services of Pingris and Rafi Reavis in their season opener against the Alaska Aces but thanks to a rejuvenated Paul Lee, who is recovering from a knee injury, they went home with a 108-95 triumph.

However, against Ginebra, which will be featuring a gigantic frontcourt of Greg Slaughter and Japeth Aguilar, Magnolia could use all the help it can get inside, and that includes Pingris.

(If it were only up to me, I would want to play. You all know me, no matter what happens. I don’t know. I don’t care if it still hurts, I’ll probably just patch this up. It feels good when I’m playing.)

(I’m good. The back pain is kind of gone. I just worry about my breathing since it’s been 10 days that I haven’t ran. That is one thing I will gradually do.)

The NLEX Road Warriors will face the GlobalPort Batang Pier at 3 pm before Magnolia clashes against Ginebra at 5:15 pm at the Philippine Arena in Bocaue, Bulacan. – Rappler.com