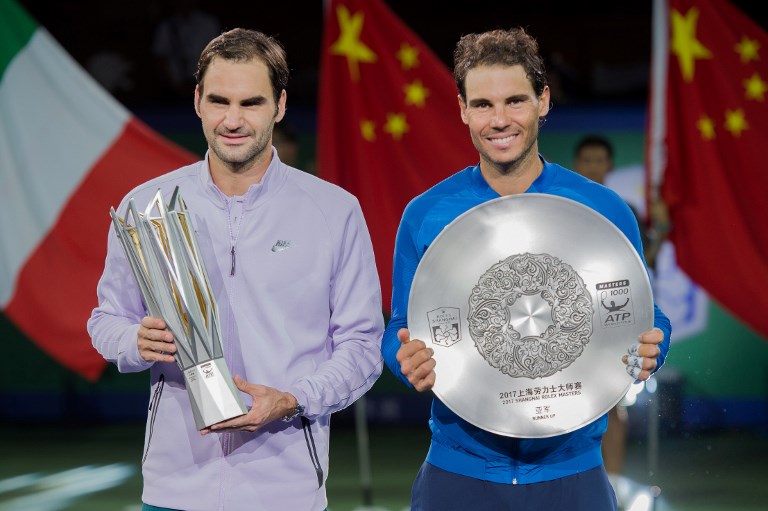 PARIS, France – Written off as dead men walking, Roger Federer and Rafael Nadal defied time to sweep the Grand Slams in 2017 while the injury curse which dogged their rivals looks set to be the new year’s early storyline.

Evergreen Federer, who will turn 37 in 2018, took his majors tally to 19 with a 5th Australian Open title, which was secured by a 5-set triumph over Nadal, and a record 8th Wimbledon with a stroll past a tearful Marin Cilic.

Nadal, 32 in June next year, was not to be outdone, claiming a 10th French Open, a third US Open crown and the year-ending world number one spot.

Federer finished the year at number two in the world, having started at 16, and a season-leading 7 titles – including 3 Masters at Indian Wells, Miami and Shanghai – despite having skipped the entire clay court season.

“It’s been an amazing year for me,” said Federer who had missed the last 6 months of the 2016 season through injury.

Nadal added two Masters titles at Monte Carlo and Madrid to his triumphs at Roland Garros and Flushing Meadows, finishing the campaign with 6 trophies.

“I never would have imagined I would end up as number one at the end of the season again,” said the Spaniard.

“It wasn’t one of my goals going into the season – far from it. After returning from a difficult period in my career and battling through injuries, this wasn’t on my mind.”

Nadal will go into the new season without his uncle Toni who has been his coach since childhood.

But one thing will be familiar – his career-long battle with knee injuries.

He was forced to withdraw after just one round at the World Tour Finals and has already pulled out of an exhibition tournament in the United Arab Emirates from December 28-30.

Injury permitting, Nadal will now start 2018 as top seed in Brisbane from next weekend with the Australian Open due to get underway on January 15.

The Spaniard is not the only A-lister under an injury cloud.

Murray has delayed his departure to Australia while Swiss star Wawrinka joined Nadal in pulling out of the UAE event.

Novak Djokovic will play in Abu Dhabi as the former world number one and 12-time Grand Slam winner makes his return having last played at Wimbledon where he picked up a season-ending wrist injury.

The new year could also see the highly-regarded Alexander Zverev make a Slam breakthrough after a 2017 which saw him win 5 titles.

However, the beanpole German had a roller-coaster year at the Slams – a last-16 spot at Wimbledon punctuated by a first-round loss in Australia, a second-round exit in New York and a 3rd-round defeat to Nadal in Australia.

On the women’s circuit, Serena Williams started the year with an Open-era record 23rd Slam triumph in Melbourne.

The achievement was made even more remarkable when the American star revealed she had won the title while pregnant.

Williams, who hasn’t played since her Australian Open win, married boyfriend and Reddit founder Alexis Ohanian in November, two months after the couple celebrated the birth of their baby daughter in September.

In Williams’s absence, a power vacuum in the women’s game opened up as Jelena Ostapenko and Sloane Stephens became two of the most unlikeliest champions at the Slams.

At Flushing Meadows, Stephens won the US Open, just 6 weeks after seeing her world ranking slip to 957. In between, Garbine Muguruza won a second major at Wimbledon.

Muguruza was one of 5 women – Williams, Halep, Angelique Kerber and Karolina Pliskova were the others – to have a spell at world number one.

Halep was to end 2017 on top but the popular Romanian, who has yet to win a major, faces a challenge to stay there next year especially with Maria Sharapova and Victoria Azarenka lurking.

5-time Slam winner Sharapova returned from a 15-month doping ban in April and ended the year at 59 in the world.

Azarenka, a two-time Australian Open champion, only played two events in 2017 after taking time away to give birth to a baby son.

Her late season plans were thwarted by a lengthy custody battle over the youngster. – Rappler.com