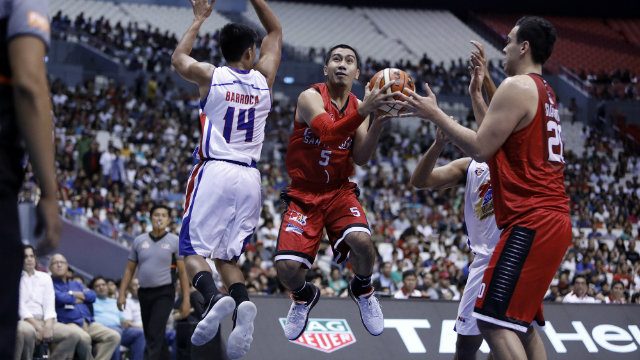 BOCAUE, Philippines (UPDATED) – Barangay Ginebra San Miguel were like the Grinch on Christmas Day as they kept the Magnolia Hotshots winless at the Philippine Arena with an 89-78 triumph in their 2018 PBA Philippine Cup debut.

Greg Slaughter was unstoppable throughout as he registered team-highs of 24 points and 13 rebounds to go with 4 blocks and 2 assists to lead Ginebra, which has won the last 3 Christmas Clasico game. Magnolia, which now has a 1-1 win-loss card, has lost both of their outings in the Philippine Arena.

Leading by just a point early in the third quarter, 53-52, the Gin Kings rode on a 9-0 spurt, capped by an LA Tenorio triple, to push their lead to double digits, 62-52. The Hotshots threatened comebacks here and there, trimming their deficit to 6 points, 64-70, but Ginebra scored 6 straight markers, 4 coming from Jervy Cruz, to pull away.

Paul Lee buried a trey with 1:50 to go that put the Hotshots within striking distance, 76-82, but an LA Tenorio alley-oop to Japeth Aguilar provided the proverbial dagger for Ginebra, which lost only once in six outings at the world’s biggest indoor arena.

“Purefoods has always been a huge opponent for us and we know they want to be us so badly and coming off a championship, usually you don’t play that well after your first game so it’s a perfect storm for us to be beat tonight but the guys figured out a way,” said Ginebra head coach Tim Cone.

Tenorio, who is coming off surgery on his elbow, showed no signs of slowing down as he produced 15 points, 8 assists, 5 rebounds and 5 steals while Scottie Thompson made his presence felt with 9 rebounds, 7 assists and 6 points. Jervy Cruz made up for the Joe Devance’ absence with 12 points, 8 coming in the final period, on top of 8 boards.

Ian Sangalang starred for the Hotshots with a game-high 25 points, a career-high according to PBA’s statician, on an stellar 59 percent shooting. He also had 11 boards, two assists and two steals. Paul Lee had 16 while Peter June Simon added 15 in the losing cause.