Tempers flare after Valanciunas tries to take ball from Westbrook 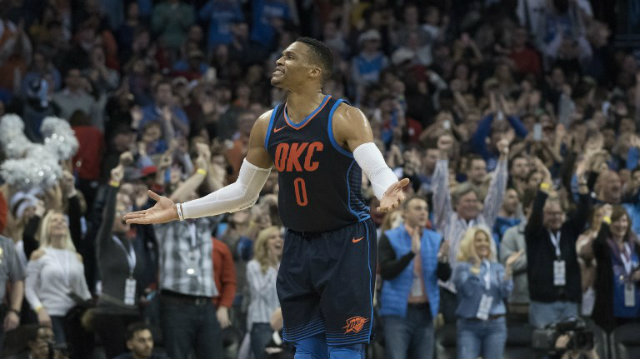 MANILA, Philippines – Russell Westbrook wasn’t about to give up the ball, not even after the whistle was blown.

Westbrook and Toronto Raptors big man Jonas Valanciunas had a minor dust-up in the second quarter of their game on Wednesday, December 27 (Thursday Manila time) when Westbrook hit the deck after driving to the rim. Valanciunas tried twice to grab the ball from Westbrook in the dead-ball situation, and on the second attempt Westbrook lost his cool and swiped at the Lithuanian big man.

Both Westbrook and Valanciunas were called for technicals, but Valanciunas wasn’t done with the rowdiness, as he later was called for a foul (and so was Steven Adams inexplicably) for throwing Adams to the floor.

This was called a double-foul. I can’t with these guys, man. pic.twitter.com/ocSOmfyc65

Adams got his revenge in the fourth quarter, posterizing Valanciunas with an authoritative dunk.

Oklahoma City earned the 124-107 win on their homecourt, extending their streak to 6. Paul George scored 33 points on 11-of-17 shooting and Westbrook added 30 points and 13 assists.

“We took the shots that were good for us,” Thunder coach Billy Donovan said. “When you’re trying to play and figure all that out, it just takes time. They’ve been eager from day one to keep getting better.”

Carmelo Anthony and Adams each added 18 points for the Thunder (20-15) while C.J. Miles led Toronto (23-10) with 20 points and Valanciunas added 16. – with reports from Agence France-Presse/Rappler.com