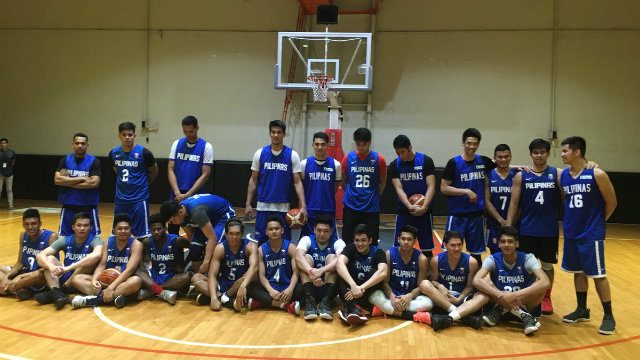 MANILA, Philippines – Players from the PBA, collegiate and high school ranks gathered at the Meralco Gym in Pasig City as Gilas Pilipinas prepares for the second window of the 2019 FIBA World Cup Asian qualifiers in February and the 2023 World Cup, which the country will be co-hosting.

Sharpshooter Matthew Wright was also present but only watched from the sidelines after he suffered a bad fall in Phoenix’s win against the NLEX Road Warriors Sunday, January 7.

June Mar Fajardo, Calvin Abueva and Raymond Almazan missed the first of a series of Monday practices leading to Gilas’ clash against Australia on February 12.

Last Friday, Gilas head coach Chot Reyes released a 23-player list that could possibly see action in the 2023 World Cup and 13 of them heed the call.

As a sign of their inclusion in the Gilas programs, all of the present players were handed blue Gilas jerseys by Reyes, Gilas patron Manny V. Pangilinan and Samahang Basketbol ng Pilipinas honchos Al Panlilio and Robbie Puno.

Ricci Rivero, the De La Salle star who was not included in the “23 for 23” lineup, still came to practice but was only a spectator. He declined to be interviewed as he watched from the sidelines.

Although not a part of the “23 for 23” lineup, Ricci Rivero is here to watch Gilas practice. @RapplerSports pic.twitter.com/HB9DOCgrmT

In a tweet, Reyes called the practice “perhaps the largest gathering of multi-generational talent in Phil(ippine) hoop history.” – Rappler.com