WATCH: Warriors bench has jokes for Ibaka after he falls guarding Thompson 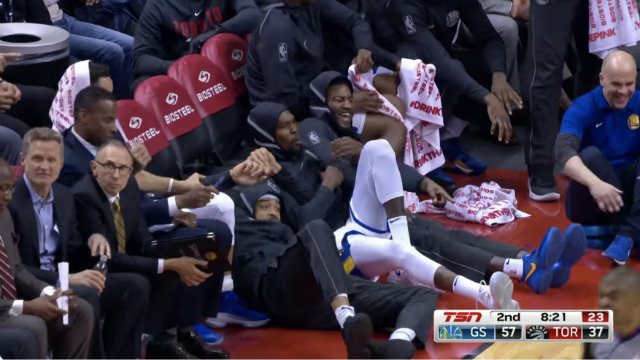 Facebook Twitter Copy URL
Copied
Kevin Durant, Steph Curry and the rest of the players on the bench have some fun at Serge Ibaka's expense

MANILA, Philippines – The Golden State Warriors bench, ever the animated bunch, were at it again versus the Toronto Raptors.

As Klay Thompson drove to the basket against Serge Ibaka during the second quarter, Ibaka took a spill to the floor. Whether he tripped or was bumped off balance, no whistle was blown and Thompson put up his shot for two points.

The Warriors bench didn’t let Ibaka off the hook so easily as they sank out of their seats to the floor as well.