Ceres outscores Shan United in penalty shootout, advances to round 2 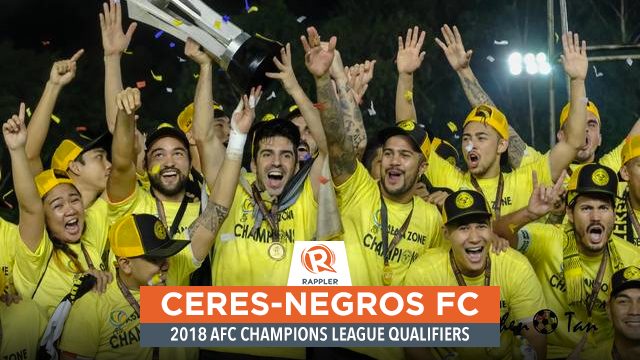 The Bacolod-based club advances to the preliminary round 2 of the 2018 AFC Champions League qualifiers, matching the campaign of Global Cebu FC last year.

Both teams were scoreless during the regulation time that required two 15-minute halves of extra time. Schröck got the score moving, 1-0, in the 93rd minute as he curled in a ball that was deflected by Nyakwe into the goal.

In the 99th minute, Shan United’s Patrick Asare leveled the score, 1-1, with a strike from the edge of the box.

As both teams failed to break the deadlock in the second half of extra time, the game restored to a penalty shootout.

Despite being able to qualify for the second round, Ceres captain de Murga admits that the team was not ready to endure this long game after only 4 days of training. He also praised the skills of Shan United that held down Ceres until the penalities.

“Shan United was good. They fired, they had their chances, they endured the game, we went into penalties and we wish them good luck for the league,” said de Murga.

Before heading into extra time, the first half tested the keepers from both teams. In the 40th minute, Toni Doblas saved a header near the post.

In the second half, the Bacolod-based squad failed to convert their shots, while Shan United experienced difficulty in bringing the ball to their attacking 3rd.

During the added time (90+2′), a chance came for Ceres when Burmese keeper Thiha Si Thu spilled the ball and collected it again before Mike Ott could take a shot. Three minutes later, Manny Ott fired a free kick that sailed over the bar.

Ceres-Negros FC will square off against Brisbane Roar on Tuesday, January 23 in Australia.  – Rappler.com