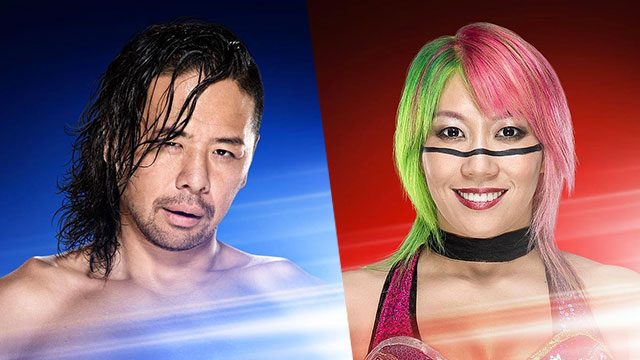 MANILA, Philippines – The city of Philadelphia added to the list of historic wrestling moments it has hosted, as Shinsuke Nakamura and Asuka outlasted 29 others in their respective Royal Rumble matches on Sunday, January 28 (Monday, January 29 in Manila) at the Royal Rumble event of World Wrestling Entertainment (WWE).

Nakamura, who entered at number 14, last eliminated 2015 Rumble winner Roman Reigns. He then made his intentions clear: he’s going after WWE Champion AJ Styles at WrestleMania 34.

What a night!!! I can’t thank you enough @WWEUniverse. You guys were behind me,that was very reassuring!!! #royalrumble pic.twitter.com/qX2cu553We

Asuka – the 25th entrant in the first-ever women’s Royal Rumble match – captured the win in the main event after last eliminating Nikki Bella.

HISTORY HAS BEEN MADE! @WWEAsuka is GOING to @WrestleMania as the first-ever winner of the Women's #RoyalRumble match!#RumbleForAll pic.twitter.com/xtuNPLshQQ

Nakamura and Asuka were the first Japanese-born wrestlers to win Royal Rumble matches. Both are heading to WrestleMania in April to face their chosen top champion in their respective divisions.

While Nakamura has made his pick, Asuka’s choice was preempted following the appearance of newly-signed WWE superstar Ronda Rousey.

Earlier in the night, Styles survived Kevin Owens and Sami Zayn in a 2-on-1 handicap match to retain his title. But controversy arose when he pinned Owens, who was not the legal man in the pinfall. Had Owens and Zayn won, they would have become co-holders of the WWE Title.

The women’s Rumble was a trip down memory lane, with Torrie Wilson, Molly Holly, Michelle McCool, Vickie Guerrero, and Kelly Kelly, plus WWE Hall of Fame inductees Lita, Jacqueline, Beth Phoenix, and Trish Stratus all returning to the ring for this match.

The old guard and the new guns later faced off in the Final 6 of the men’s Rumble, with veterans John Cena, Randy Orton, and Mysterio on one side, and Nakamura, Reigns, and Finn Balor on the other.

We are down to the FINAL SIX in the Men's #RoyalRumble match LIVE on @WWENetwork!@ShinsukeN@FinnBalor@WWERomanReigns@JohnCena@RandyOrton@reymysterio pic.twitter.com/PHmnjg7U5O

There were also comedic spots, such as Heath Slater being ambushed and kicked around by entrants on the ramp, and Vickie Guerrero unceremoniously thrown out by multiple women.

Cesaro and Sheamus regained the RAW Tag Team Championship from Seth Rollins and Jason Jordan. Jordan appeared to have been dazed and tagged out of the match, leaving Seth to fend off their opponents.

In the kickoff show, Bobby Roode successfully defended his United States Championship against Mojo Rawley in an open challenge.