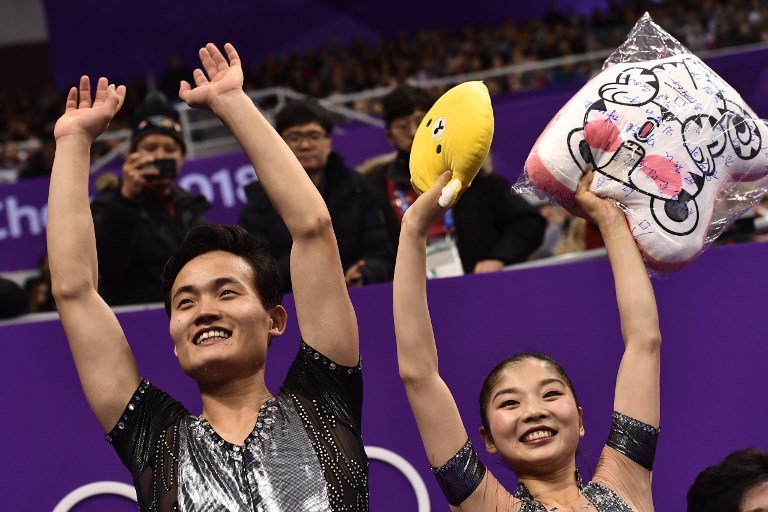 GANGNEUNG, South Korea – North Korean skaters Ryom Tae-Ok and Kim Ju-Sik produced the performance of their lives to qualify for the pairs final at the Olympic Games on Wednesday, February 14.

The Pyeongyang-born duo smashed their personal best score to reach the free skate showdown on Saturday.

Supported by the 200-plus strong band of North Korean cheerleaders, Ryom and Kim seduced the crowd with an excellent execution of their short program to the Beatles classic A Day In The Life.

The judges awarded them 69.40 points, smashing their previous highest score of 65.25.

Ryom, 19, and Kim, 25, are the only two of the 22 North Korean athletes at Pyeongchang 2018 to meet the Olympic qualifying standards.

And their skill was on full display at the Gangneung Ice Arena, as with Jeff Beck’s haunting guitar strains filling the air they nailed their opening triple twist lift generating a roar of approval from their flag-waving supporters.

At the end of their routine they smiled, waved and bowed, and jumped up in delight when their marks flashed up on the big screen.

They were marched past the media by a minder without stopping to discuss their performance.

But just before they left Kim said the support had been a boost to their performance.

“There has been no discomfort and now that we have competed, (we could see) how strong our Korean people can be when we are together,” he said.

“The sight of them cheering offered huge support.”

“(I could feel) we are one people sharing the same bloodline.”

Their performance ensured they would progress to Saturday’s free skate as one of the 16 qualifiers.

The couple’s presence at the 2018 Games was only confirmed following a sudden rapprochement between the two Koreas after tensions reached fever pitch as Pyongyang carried out a series of weapons tests. – Rappler.com