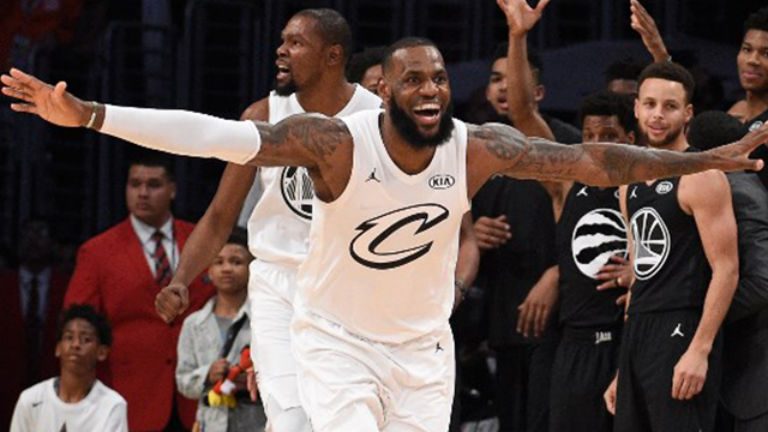 Facebook Twitter Copy URL
Copied
LeBron James, who chalks up a near-triple-double of 29 points, 10 rebounds and 8 assists, is named the Most Valuable Player of the All-Star Game

MANILA, Philippines – Team LeBron had the last laugh in the 2018 NBA All-Star Game after pulling off a come-from-behind 148-145 win over Team Stephen at the Staples Center Arena in Los Angeles Monday, February 19.

LeBron James, who chalked up a near-triple-double of 29 points, 10 rebounds and 8 assists, was named the Most Valuable Player of the All-Star Game.

.@KingJames is your 2018 #NBAAllStar MVP!  pic.twitter.com/uEv92CpWZm

James delivered in crunchtime on both ends of the floor. He gave Team LeBron a 146-145 lead with a layup off former Cleveland Cavaliers teammate Kyrie Irving’s assist before dishing it to Russell Westbrook, who put Team LeBron up by 3 points with a fastbreak layup.

Team Stephen had enough time to score a game-tying triple but James, together with Kevin Durant, blitzed on Stephen Curry, who was forced to pass the rock to DeMar DeRozan. DeRozan, however, did not get his 3-point attempt off before the final buzzer expired.

Durant added 19 points, 6 rebounds and 5 assists for Team LeBron while Irving had 13 points, 9 assists and 7 rebounds. Westbrook finished with 11 points, 8 rebounds and 8 assists and Paul George had 16 points, 5 rebounds and 4 assists in the win.

The NBA introduced a new format in the All-Star Game this year to try and make it competitive unlike the past few years. Last year’s edition had a combined score of 372 points.

James and Curry, the two top vote-getters, were assigned as captains for their respective teams. They chose from a pool of 22 players, with the first 4 picks coming from the All-Star starters of both conferences. – Rappler.com