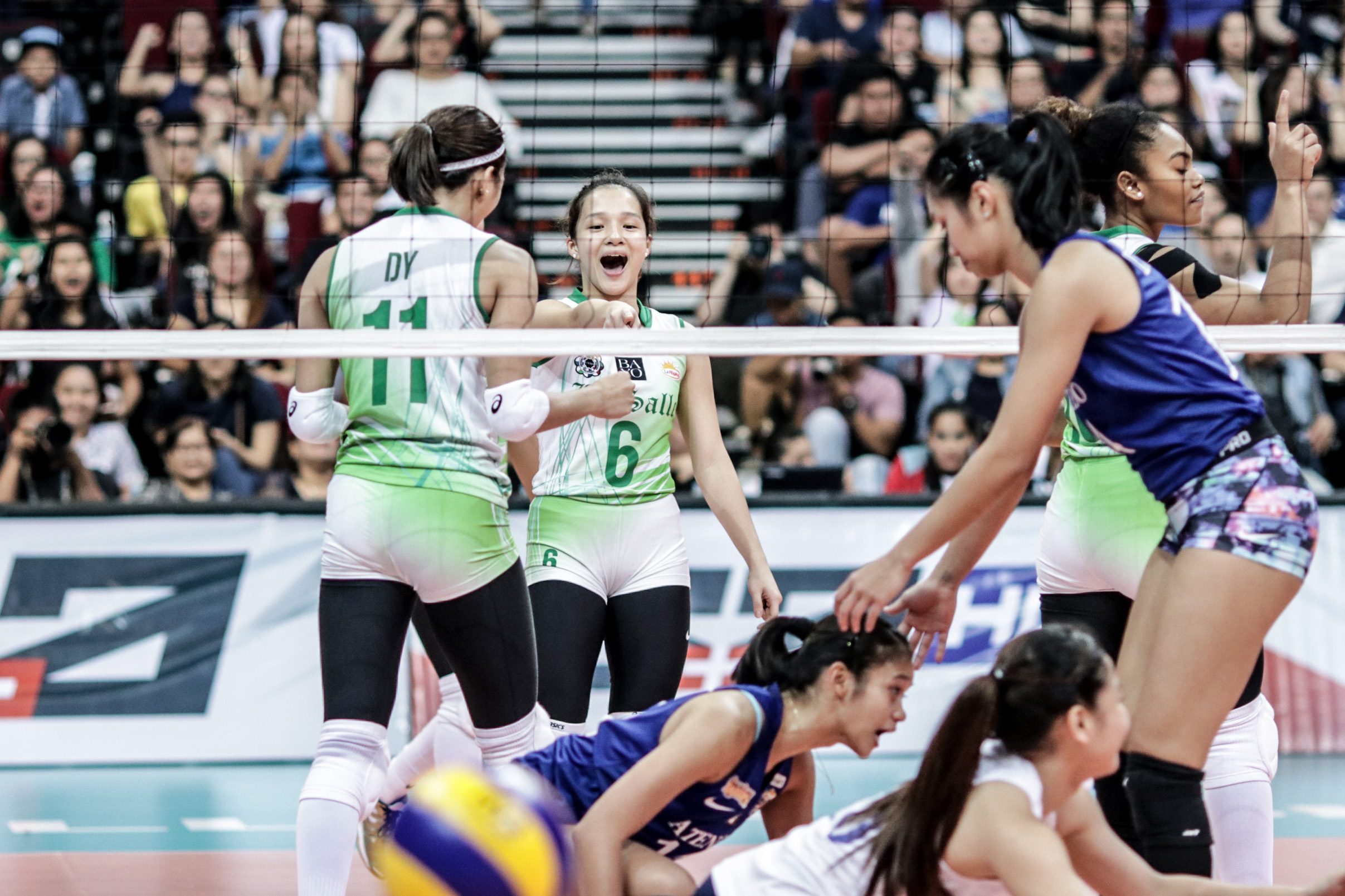 Facebook Twitter Copy URL
Copied
According to the second-year setter, she was pointing at the line to indicate the ball was in

Although Cobb herself admitted that her performance wasn’t perfect, she helped steer DLSU to a 4-set win over its biggest rival which gave La Salle a 5-2 record at the conclusion of the UAAP Season 80 first round. (READ: DLSU Lady Spikers bounce back to topple Ateneo)

The 5-foot-3 and a half Cobb finished the game with 22 excellent sets and recorded 6 points, the most impressive of which came off a block against 6-foot-3 Kat Tolentino at the end of the second set.

After blocking Tolentino, Cobb was seen pointing on the other side of the volleyball court which sparked outrage from some fans on social media who argued that it showed lack of sportsmanship.

Swag is okay
Winning a play is okay
But laughing while the other is hurting is not okay https://t.co/Y9CJWDc5SV

Talking to Rappler on Thursday, March 8, Cobb clarified that her finger-pointing wasn’t aimed at Tolentino.

As for what else she was saying – which some viewed as trash talk – Cobb explained that she was just screaming “Yeah!” after scoring the crucial point for the defending champions.

The second year player admitted she had deactivated her Twitter account weeks ago and was oblivious to the criticism she was receiving online, but heard of the news through text messages from her family and friends.

Previously unaware that it had become a “big thing”, Cobb was also tagged on Facebook posts and discovered she had become a trending topic.

“Nothing was intentional,” she said.

And again, Cobb clarified that she wasn’t pointing at Tolentino. “It was the line, because it was in.”

Cobb finished the first round as the 4th best setter and the top server in the UAAP. Although there have been moments when her lack of experience was evident, she’s had more highs than lows in her first year as a starter, including a barrage of services which helped DLSU sink UP in their first encounter.

But Cobb is aiming for a better showing in her team’s final 7 games, aware of the important role she plays for the Lady Spikers’ championship retention bid. (READ: ‘Passing grade’ for Cobb as DLSU’s starting setter – De Jesus)

La Salle will immediately have a tough test to open the second round as it faces an NU team which topped the league standings. The Lady Bulldogs also handed DLSU its first loss of the season, led by the league’s best blocker in Jaja Santiago.

“Of course, yeah, we are,” Cobb answered when asked if La Salle is looking for retribution after the result of its first-round, 5-set loss at the hands of National U.

She also said that the Lady Spikers are confident with the rematch approaching, given the team’s current perspective.

“It started with how we prepared for the Ateneo game. The whole week, last week, everyone had a clean slate. It was very light. Even if physical training was hard, the feeling was very light, very positive. We carried it this week. (READ: DLSU Lady Spikers catch fire with ‘renewed confidence’)

(The mantra of, “Think positive always,” I feel, was the key in the last game. So I think we’re just going to continue doing it.) – Rappler.com