The NBA Finals contender no one talks about 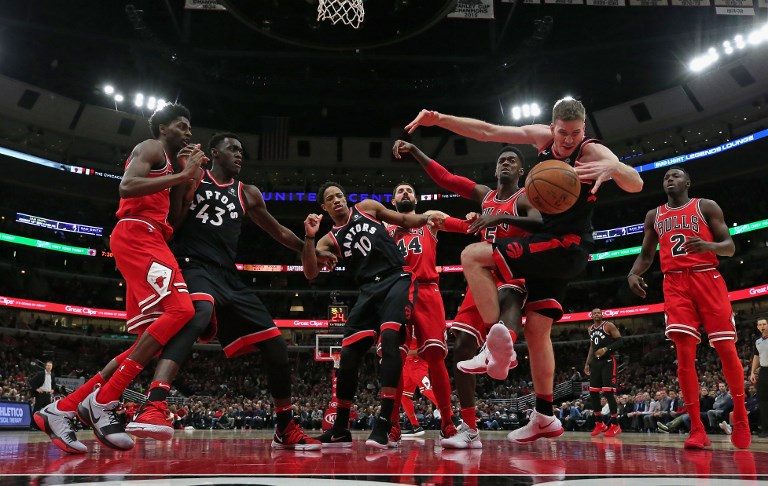 Facebook Twitter Copy URL
Copied
Quietly and methodically, the Raptors have established dominance over the league this season, leaving broken records in their wake

MANILA, Philippines – Before anything else, here is a clip of the Toronto Raptors being introduced to the tune of Barney the Dinosaur in Milwaukee about a year ago.

With that video out of the way, we can begin.

The Toronto Raptors are one of the NBA’s premier teams in the Eastern Conference. They boast an All-Star backcourt duo of Kyle Lowry and DeMar DeRozan while former NBA blocks leader Serge Ibaka holds them down in the post. They are are currently leading the East with a 51-17 record – 5 whole games ahead of second-ranked Boston Celtics – and are riding a 5-year streak of playoff appearances.

There is just one, major problem plaguing this franchise, and is the reason why a middling contender like the Bucks have the guts to shame them with a kids’ show-themed introduction.

The Raptors plainly suck – with a capital S – in the playoffs, when it matters most. During the first year of their new playoff run in 2013, they nearly advanced to the East semifinals after taking the Brooklyn Nets to a grueling 7-game series. However, star forward Paul Pierce blocked a potential game-winner by Lowry at the last second of Game 7, effectively eliminating the Raptors. The year after that, the Raptors got swept, 4-0, in the first round by the Washington Wizards, again led by Pierce.

Their fortunes would improve in 2016, as they reached the Eastern Conference Finals, but they again lost to eventual NBA champion Cleveland Cavaliers in 6 games. The following year, they once again met the Cavaliers in the second round but got swept again for the second time in 3 years. It was during these sweeps that many fans started to question the heart of their stars and completely ignore them to focus on other promising teams.

The fans, however, did not ignore the ensuing jokes. #WeakTheNorth – a spin on the Raptors’ official #WeTheNorth hashtag – started trending while major media outlets published edited pictures of Toronto jerseys featuring Barney instead of the usual velociraptors. Here’s a snapshot of Bleacher Report showcasing their Photoshop skills:

This year, however, we may just see the jokes end once and for all, because the Raptors are back on the hunt and not fooling around.

Quietly and methodically, the Raptors have established dominance over the league this season, leaving broken records in their wake.

Just last week, Toronto became the first team in the league to clinch a playoff spot – ahead of the powerhouse Houston Rockets and defending champion Golden State Warriors. They did so in just 64 games – setting a new franchise record for the fastest playoff qualification.

Speaking of Houston, they also broke the red-hot Rockets’ 17-game winning streak just 3 days after they qualified for the playoffs in a 129-113 drubbing that wasn’t even nationally televised. Meanwhile, subpar teams like the Los Angeles Lakers and the New York Knicks still get all the airtime they want just because they are big market teams.

Diving into deeper waters in the vast ocean of analytics, the Raptors this season are also setting the fastest pace in franchise history while also having the highest offensive rating, which simply means that this Toronto squad is the fastest and most offensively efficient in the Raptors’ 22-year existence. As a result, they are now just 6 wins away from breaking another team record of 56 victories in 2016 with 13 games still left in their calendar. In comparison, the moving media buffet known as the Cavaliers, currently at 39-29, are already 3 losses below a possible 56-win season.

So where is all this historic success coming from?

The answer lies within the league’s unsung heroes and the Raptors’ greatest source of power this season: the bench – the players you don’t even know without asking help from Google.

For the uninitiated, they are Jakob Poeltl (pronounced PUR-tel), Pascal Siakam, CJ Miles, Delon Wright and Fred VanVleet. These 5 reserves are the reason why Lowry and DeRozan’s scoring averages have significantly dropped. More importantly, these 5 are the reason why come playoff time, both Lowry and DeRozan will come out fresher than ever before.

Compared to last season, both Lowry and DeRozan are also averaging way lesser minutes per game, sitting at a respective 32.1 and 34 minutes per contest. Last year, Lowry averaged a career-high 37.4 minutes a game while DeRozan averaged 35.4. During the playoffs, both stars averaged 37 a night. As a result, they were completely gassed and largely ineffective by the time they met the well-rested Cavaliers.

Going back to their bench, the 5 aforementioned players are just as feared as their starting counterparts, maybe even more. In 68 games this season, the Raptors’ bench mob has consistently outclassed every 5-man unit they faced – starter or not. They are currently churning out a league-best 29.9 point differential per 100 possessions.

Now, before you get turned off by yet another obscure stat, picture this: The Raptors bench outplays opponents better than the Warriors’ starting 5 featuring Steph Curry, Kevin Durant and Klay Thompson. No, this stat is not saying that the Toronto reserves are skill-wise better than 3 All-Stars. It’s saying that these 5 players produce the most points against opponents whenever they are all on the floor.

Here’s a two-minute video by ESPN’s FiveThirtyEight further explaining why point differential is something to not overlook that easily.

Basically, what this stat is saying more than anything is that opponents regularly underestimate the power that the Toronto bench has, thinking that benching all 5 starters is a sign of momentary relaxation or admission to defeat.

Underestimation – this has been the recurring theme associated with the Toronto Raptors, and for good reason, really. For the last 3 seasons, they have completely dropped the ball whenever the playoffs roll around, causing everyone outside Canada to not really picture them as a serious threat.

This year, however, head coach Dwayne Casey may just have outdone himself. After 4 seasons of heartbreak, he may have just cooked up the perfect recipe for success and quite frankly, for job security.

Yes, the Toronto Raptors can still fail. Yes, they may very well still be an early-round exit. But at the very least, judging from the work they have put in this season, the best thing we can do as fans is give them the attention and respect they rightfully deserve. – Rappler.com