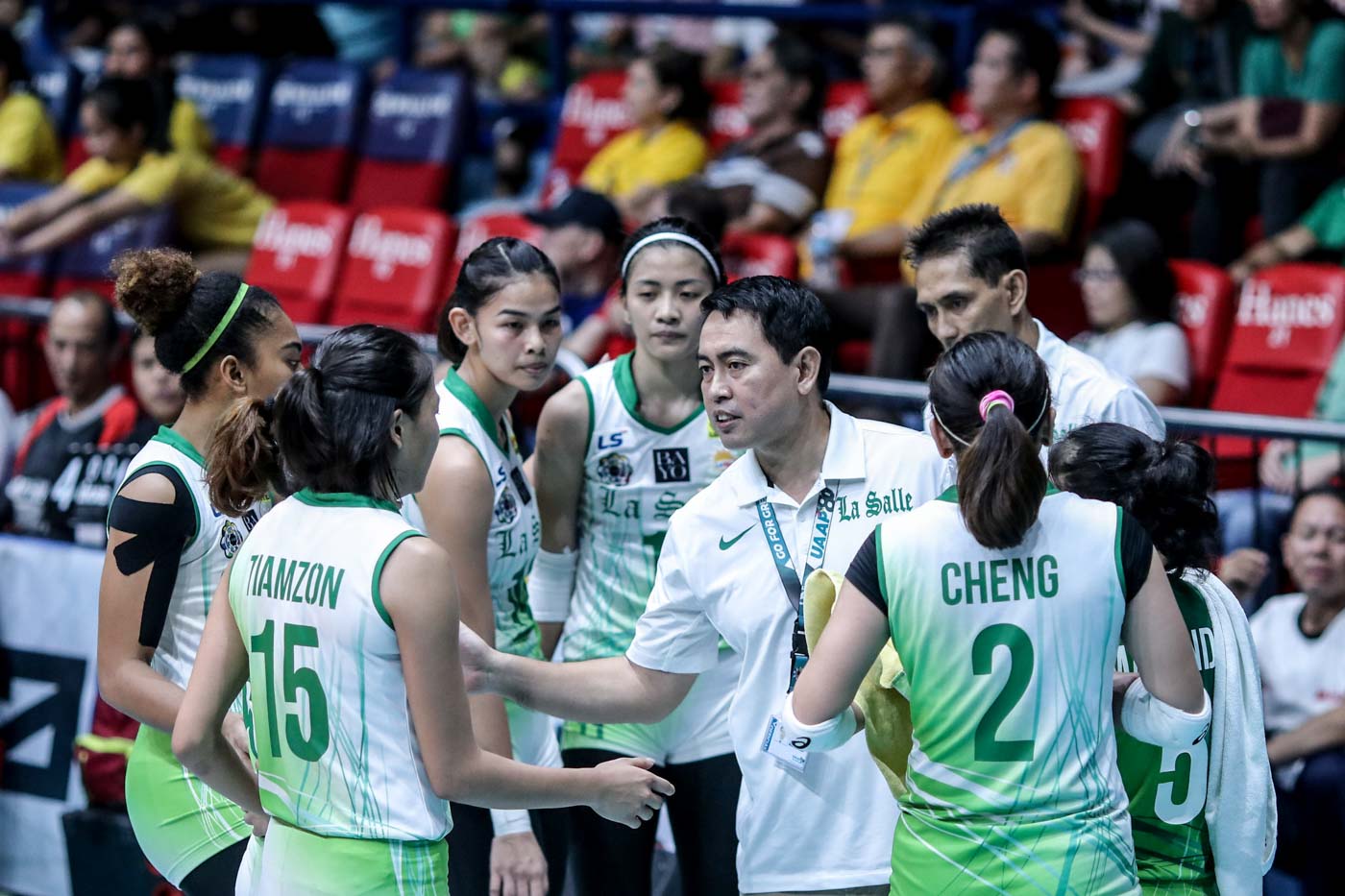 Ten-time champion head coach Ramil de Jesus added another Final 4 appearance to his record, and the Lady Spikers are halfway there in clinching their 3-peat championship.

The Lady Spikers hit this mark by cruising through their match against cellar-dwellers University of the East (UE) on Saturday, March 24. However, it was done with the conscious effort to not take the Lady Spikers lightly.

(This second round, UE did good, they receive everything, you can’t beat them in straight sets, so I said that we really have to respect UE, prepare for them, and we can’t let them have momentum inside the court.)

In the straight-set win, Dawn Macandili was able to best her rival with 19 excellent digs, but Arado still stayed within her reach by making 15 excellent digs to help keep her team alive.

Despite the close reception and digging statistics of Macandili and Arado, the 5th year DLSU libero ignored the comparisons she has seen on social media because her focus is on winning the championship, and not the individual award.

(I’m not really focusing on the individual awards because if I get it, okay, thank you. But if I don’t get it, it’s okay, as long as we get the championship.)

De Jesus is not really thinking of the Final 4 as he takes it one game at a time. However, he does live up to expectations that DLSU’s Final 4 streak has become a “tradition” in the school’s volleyball program.

(I guess the semis streak is a product of hardwork, and secondly, the kids, because they see from generation to next generation that their senior players leave it to them, then they adapt the tradition of the team.)

As a multi-titled coach, De Jesus knows what the character of a champion team is like.

(One of the things the team looks for is that they cannot just enter the court, so the heart should always be there, so it’s always all out. The character should be developed inside and outside the court.)

In the players’ point of view, they owe their development and championships to De Jesus, who has led them up until this point.

“It’s a good feeling na we’re back sa Final 4, and we owe it all to our coach na ganoon ang tradition ng La Salle kasi magaling ang coach namin. He trains us to be the best that we can be so we show it sa games,” said veteran player Kim Dy.

(It’s a good feeling that we’re back in the Final 4, and we owe it all to our coach that we have that tradition in La Salle because our coach is good. He trains us to be the best that we can be so we show it in the games.)

The reigning champions will continue their Season 80 campaign in two weeks as they face the University of Santo Tomas (UST) Golden Tigresses on Sunday, April 8, at the Filoil Flying V Centre. – Rappler.com