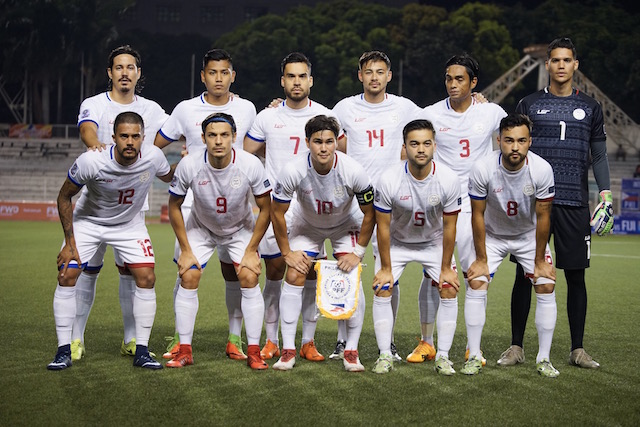 MANILA, Philippines – One more day until the Azkals face Tajikistan on Tuesday, March 27, for their last chance in qualifying for a historic berth in the 2019 AFC Asian Cup.

The Azkals are in their prime position to qualify for the Asian Cup as they stand on top of Group F with 9 points off two wins and 3 draws, including the 4-3 victory over Tajikistan in the away leg in Dushanbe last June.

“This is a game that we have to win because we want to win our home games. We want to win every game. It’s important for us to beat a team that we have beaten before. We haven’t lost a game yet in the tournament so we want to do the same, we don’t want to lose the game at home,” said head coach Thomas Dooley.

The Philippine Men’s National Football team are coming off a 3-2 win against Fiji in an International Friendly “A” tournment. Azkals captain Phil Younghusband ignited the offense with a spot kick towards the bottom-left in the 29th minute.

Hikaru “Pika” Minegeshi and Kevin Ingreso followed with two more goals that saw the Azkals go up 3-0. However, in the last 20 minutes of the game, the Azkals’ defense collapsed and the visiting team made two goals to cut the deficit to one. Despite the late scare, the Azkals escaped with the win.

Known for his experiments, Dooley made 5 subsitutions at halftime, including subbing in Nick O’Donnell for newly-recruited Fil-Danish keeper Michael Falkesgaard. Although the Azkals had an aggressive start to the second half, the problematic last stretch enabled the Philippine team to point out adjustments heading into the Asian Cup qualifiers.

“The first 20 minutes of the second half was actually pretty good. They did what we wanted to do, trying to open the defense a little bit more, we we created some chances, we had a lot of chances but we couldn’t finish it,” said Dooley.

At the turning point of the match, Carli de Murga went down with a nagging feeling from his hamstring, which eventually also sparked the Fiji offense. Dooley emphasized that De Murga is back at 100% heading into Tuesday’s match.

“With injuries that you get like Carli, who has [it] on the hamstring, it hurts, and that’s something that we have to take care of right away but he was training yesterday he was 100% fit,” said Dooley.

Dooley also reminded the players to be wary of the referees and avoid falling into the same situation as the 78th minute of the Fiji friendly where Roy Krishna won the penalty after a mid-air clash with O’Donnell.

“So is it a foul and then they go like this [raise their hands] because they think it’s a foul and they just stay and they don’t do anything. That cannot happen. I told them that you need to play until you win the ball. Maybe they’ll have to call you 5 times back because you didn’t stop playing,” said Dooley.

Good mood for the camp

Despite the minor injuries including starting keeper Neil Etheridge’s back injury and Javier Patiño’s recovery from ACL, the Azkals are fending off these discomfort as they are in their best combination of mental and physical health.

“We’re at home, it’s on our turf. We’re mentally fitter, we’re physically fitter. The circumstances going into this game are a lot better than previous game. I think we have every right to feel confident going to this game,” said captain Younghusband.

The Azkals will be facing a slighty different Tajikistan team with their captain Nuriddin Davronov suiting up for the game this time to boost Tajikistan’s midfield presence. Although the Tajiks will be missing the services of a couple of players, the Philippine team will still be gearing up for an 11 vs 11 match.

It will take a win or a draw for the Azkals to qualify, while Tajikistan has to win in order to get ahead of both Yemen and the Philippines for the Asian Cup berth.

The pressure may be great for the Philippine Azkals, but they are putting aside the thought of the outcome by focusing on the smaller steps towards the goal.

“I’m trying to take the outcome away. When you’re focused on what happening after the game, you forget to do the little steps that you have to do to move forward and be successful,” said Dooley.

With the team feeling confident, they only hope to continue their laughter and smiles until the end of the match.

“The players, they are smiling, laughing, we’ve had a couple of really good meals and we had some team bonding,” recalled Younghusband. “The players are confident and in a good mood heading to tomorrow.” – Rappler.com