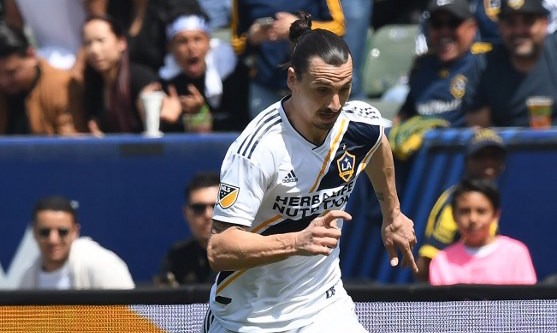 LOS ANGELES, USA – Zlatan Ibrahimovic announced his arrival in Major League Soccer with two goals on his debut including an injury-time winner as the Los Angeles Galaxy fought back from 3 goals down to beat Los Angeles FC, 4-3, on Saturday, March 31.

Ibrahimovic — who only arrived in California on Thursday, March 29 — lashed home an imperious volley from 40 yards just 6 minutes after coming on as a second-half substitute to make it 3-3 at the StubHub Center.

The Swede then headed home Ashley Cole’s cross in injury time to put Galaxy ahead in an extraordinary finale that lived up to the hype surrounding the veteran striker’s arrival from Manchester United.

“If you look back, every team I played for, I scored in my first official game. I wasn’t going to let that stop today,” a delighted Ibrahimovic said afterwards. “I heard the crowd saying ‘We want Zlatan, we want Zlatan’ and I gave them Zlatan,” he added.

THE LION IS HUNGRY!!!

Ibrahimovic’s winner was the final act of a thrilling first ever derby between the Galaxy and expansion side LAFC, who had surged into a 3-0 lead early in the second half after two goals from Carlos Vela and an own goal from Daniel Steres.

Slack play from LAFC allowed Galaxy to pull a goal back through Sebastian Lletget in the 61st minute after dogged work from Servando Carrasco.

The home crowd then roared in appreciation in the 71st minute when Ibrahimovic made his entrance from the substitutes bench.

The 36-year-old star had an instant impact and was involved in the build-up which led to Galaxy’s second goal, headed in by Chris Pontius from Emmanuel Boateng’s cross.

Suddenly the Galaxy dared to dream of an improbable comeback, and when Ibrahimovic thundered home his equalizer on 77 minutes the home side had drawn level.

“Ibrahimovic is the perfect definition of a guy who always dares to be brilliant,” Schmid said. “If you do that, you can pull off things. That’s a goal that will go around the world.”

LAFC had a chance to regain the lead when Costa Rican international Marco Urena hit the woodwork late on.

But instead it was Ibrahimovic who was determined to have the last word.

Former Chelsea and England left-back Cole stormed forwards down the left flank and crossed into the area, and Ibrahimovic guided home the header to launch his MLS career in the most dramatic way possible.

Ibrahimovic had talked boldly on Friday, March 30, of helping restore the Galaxy to their position of dominance in Major League Soccer after a dismal 2017 campaign that saw them finish bottom of the Western Conference.

However, the scale of the task facing Ibrahimovic became apparent after only 26 minutes on Saturday, with Mexico striker Vela scoring twice to give LAFC a 2-0 lead that their dominant play deserved.

Vela drew first blood after only 5 minutes, picking up the ball on the edge of the area and curling a magnificent strike beyond the dive of Galaxy goalkeeper David Bingham to make it 1-0.

Rossi almost doubled the LAFC lead in the 11th minute, flashing a low angled shot wide of the post.

But Los Angeles did not have to wait long for the second, with Vela beating Bingham before coolly taking his time to lift his shot into the goal off the underside of the bar.

On the bench, Ibrahimovic bowed his head in his hands, and it got worse when Steres turned in an own goal early in the second half to put LAFC 3-0 ahead.

However Ibrahimovic had other ideas soon after coming on as a substitute with just under 20 minutes remaining. – Rappler.com