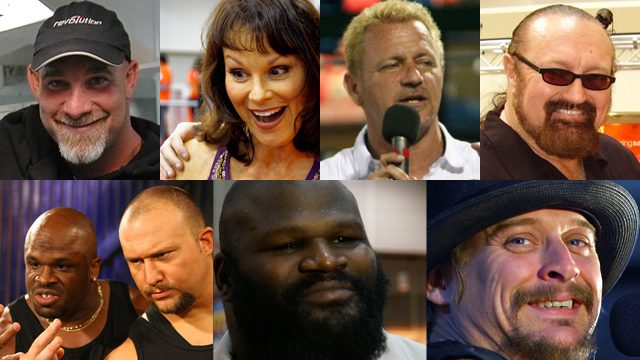 MANILA, Philippines – Who’s next? They are.

The newest batch of professional wrestling icons were inducted into the WWE Hall of Fame in a ceremony on Friday, April 6 (Saturday, April 7 in the Philippines).

The class of 2018 is led by Goldberg, a powerhouse who took the wrestling world by storm and helped bring more eyes to the product during the fierce “Monday Night Wars” between WWE and World Championship Wrestling (WCW).

Double liver transplant survivor and wrestling fan Jarrius “JJ” Robertson also received the Warrior Award at the Hall of Fame ceremony. The WWE recognized 15-year-old Robertson for living life “with the courage and compassion that embodies the indomitable spirit of Ultimate Warrior,” whom the award was named after.

The WWE Hall of Fame induction ceremony is part of the events leading to WWE’s annual extravaganza, WrestleMania, on Sunday, April 8 (Monday, April 9 in the Philippines).

Goldberg, a former football player, was WCW’s headliner in its later years. He owned a “173-match undefeated streak” in WCW thanks to his Spear and Jackhammer finishers, and faced wrestling greats such as Hulk Hogan, Sting, and Diamond Dallas Page.

He became a one-time WCW World Heavyweight Champion and two-time US Champion.

After WCW closed shop, Goldberg went to WWE in 2003 and won the World Heavyweight Championship, but left the company the following year. He returned in 2016 to face his nemesis, Brock Lesnar. He won the WWE Universal Championship from Lesnar in 2017.

Famed wrestling manager Paul Heyman presided the induction of Goldberg, who thanked his fans and family for supporting him both during his original run and his 2016 return. “It’s all about you, people. And you made me love wrestling, too. Truthfully, it’s all about the fans,” he said.

Goldberg then credited Sting and Diamond Dallas Page for his career. “There is no way in hell that I can [overlook] what you [Sting] did for me, ever….Because you had integrity. You were proud. And I followed your footsteps. And I hope I did you proud, because you were instrumental in what happened to me, along with that man right there, Dallas Page,” he said.

“You two made me, and I will be forever grateful for that,” he added.

Goldberg appeared to not discount another in-ring return. “This has been one hell of a journey, and as long as I’m 2-1 over Brock Lesnar, have the strength to Jackhammer anybody in this room….I never say never. Which leads me to my one final question: Who’s next?”

Edge and Christian inducted The Dudley Boyz and praised them as the “greatest tag team in the history of the business.” The two teams, along with Matt and Jeff Hardy, waged war on multiple occasions, notably in a Triangle Ladder Match then a Tables, Ladders, and Chairs Match for the WWE tag titles in back-to-back WrestleMania events.

The Dudleys won tag team championships in almost every promotion they’ve been in, from Extreme Championship Wrestling (ECW) where they made their debut, to WCW and WWE, to other major promotions in the US and Japan.

The duo then displayed their table-breaking prowess once more by driving a backstage staff through a table on stage.

Hillbilly Jim, who performed during WWE’s “Rock ‘n’ Wrestling” era in the 1980s, was inducted by wrestling manager Jimmy Hart.

Hillbilly Jim shared a piece of advice during his speech: “Take opportunities [seriously], because sometimes they knock at your door, and if you don’t answer, kids, they go to the next door and they never come back.”

He also thanked the wrestling fans for their support. “The fans accepted me from Day One, and they never left me.”

Female wrestling pioneer Ivory was honored next. After a long run at Gorgeous Ladies of Wrestling (GLOW), Ivory debuted in WWE in 1999, and soon won 3 Women’s Championship titles. Her brash in-ring attitude was balanced by her humanitarian efforts outside the ring.

Her friend and inductor Molly Holly shared, “It’s not just Ivory’s work ethic, athleticism, confidence on the microphone, and tremendous ability to portray a wide variety of personas that has kept her in the spotlight as one of the trailblazers and icons of the women’s revolution all these years. It’s also because of who she is as a person.”

Ivory lauded the “growing and evolving” women’s division in her speech. “I’m so very proud to be a sister to all of you. Thank you for your hard work, and thank you to WWE for the revolution that led to an evolution.”

Kid Rock was this year’s inductee into the WWE Hall of Fame celebrity wing. The artist has lent songs to and performed at many WWE shows, including WrestleMania. He also provided one of The Undertaker’s entrance themes during his “American Badass” biker gimmick.

“The Attitude Era has a soundtrack to it, and Kid Rock was a huge part of that soundtrack,” said WWE chief executive officer Triple H who inducted the rock, hip hop, and country singer.

Next to be inducted was Jeff Jarrett, son of wrestling promoter Jerry Jarrett. Brandishing an acoustic guitar, “Double J” debuted in WWE with a country singer gimmick, and later became a 6-time Intercontinental Champion.

During his speech, Jarrett praised Road Dogg – who inducted him – as well as his former tag team partner, the late Owen Hart.

He closed with a quip from a poem hanging in his home: “So stick to the fight when you’re hardest hit / It’s when things seem worst, you must not quit.”

Meanwhile, Mark Henry capped a prolific wrestling career with his entry into the WWE Hall of Fame. A two-time Olympic weightlifter, Henry debuted in WWE in 1996. He became part of the Nation of Domination stable, and later ran with the “Sexual Chocolate” and “World’s Strongest Man” gimmicks.

In 2008, he won the ECW Championship when WWE revived the hardcore brand. Later, Mark Henry founded the “Hall of Pain” chronicling his “path of destruction,” and captured the World Heavyweight Championship in 2011. He was inducted into the Hall of Fame by The Big Show.

“Today, I am humbled. I’m also in shock that I was able to make it 20 years,” said Mark Henry in an emotional speech. He also urged the audience to “place inclusion and accept diversity as an absolute standard.”