No Curry, no problem as Warriors rout Spurs 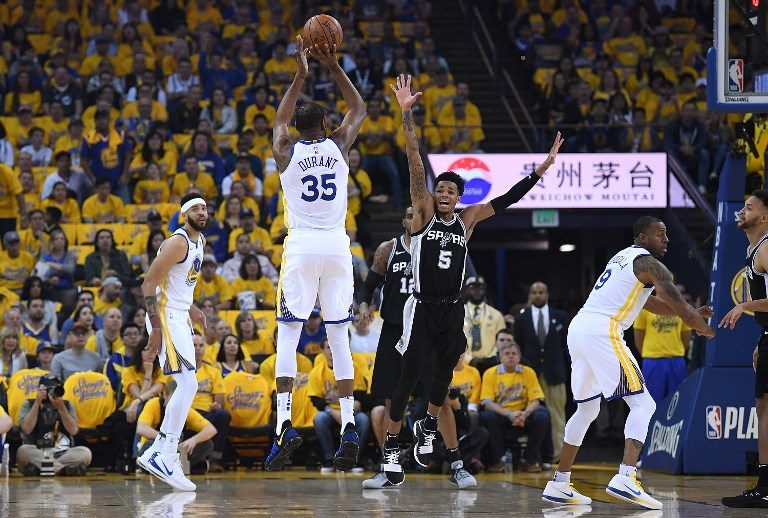 Klay Thompson scored a game-high 27 points on 11-of-13 shooting, including 5-of-6 from 3-point range, and Kevin Durant added 24 points, 8 rebounds and 7 assists to power Golden State.

“We played well. We played hard. We need to do even better next time,” Durant said before praising Thompson’s long-range heroics.

“Klay knocked down shots. He was really good. He was penetrating as well,” Durant said. “We won’t always make shots at that rate but we need to play good defense like that as well.”

The host Warriors updated star guard Curry’s left knee sprain before playing, saying he was making progress and will be re-evaluated next Saturday, on the eve of game 4 of the best-of-seven first-round series at San Antonio.

Curry, who missed Golden State’s last 10 regular-season contests after the March 23 setback, will intensify his rehabilitation work in the next few days with more running and lateral movement, the team said in a statement.

Curry averaged 26.4 points, 6.1 assists and 5.1 rebounds for the Warriors, who have played without several top players during the season due to injuries.

Despite the setbacks, Golden State won 58 games and are solid contenders for a 3rd title in 4 seasons and 4th consecutive trip to the NBA Finals.

“We’re a championship ball club. We know what it takes this time of year in order to win,” said Warriors forward Draymond Green.

“We want to get back to that, regardless of what everyone’s saying, you know, ‘The Warriors have lost it. They’re not together. They can’t win without Steph. They’re not the same team. Blasé, blasé, blasé blah blah blah.’ We know what we’re capable of.”

“There have been games and series that we’ve won without Steph. We’ve won games without Kevin, without myself, without Klay, without our head coach.

“We’re primed for this. A lot of people have tended to forget what we’re capable of. But we know, and we intend to show that.”

The Warriors struggled down the stretch of the regular season and finished with only the 3rd-best record in the NBA behind Western Conference leader Houston and Eastern Conference pace-setter Toronto.

“Everybody kept our individual games on point,” Durant said. “At the end of the season, our minds weren’t on it. They were on the playoffs.”

“Today they were on the present.”

Reserve Rudy Gay led the Spurs with 15 points while LaMarcus Aldridge and Bryn Forbes each added 14 for San Antonio.

At Toronto, the Raptors snapped a streak of losses in all 9 prior playoff openers in club history.

“It’s big for us. We got the job done,” said Raptors star Kyle Lowry. “Now we’re just going to try to continue to build on that.”

The Raptors struggled into the 4th quarter against a Wizards squad that had the most losses of any playoff team and split 4 regular-season games against Toronto.

But Raptors reserve Delon Wright scored 5 points and C.J. Miles added a 3-pointer in a 10-0 Toronto run in the 4th quarter for a 105-96 lead the Wizards never overcame.

At Philadelphia, the 76ers overcame a spirited first half display from Miami before stamping their class on their series opener with a devastating second half display.

Miami led 60-56 at half-time but were unable to respond to a second-half onslaught from the in-form 76ers, who have now won 17 games straight.

The Sixers outscored the Heat 74-43 in the second half, making full use of an offensive line-up that saw 5 players finish with double-figures. – Rappler.com