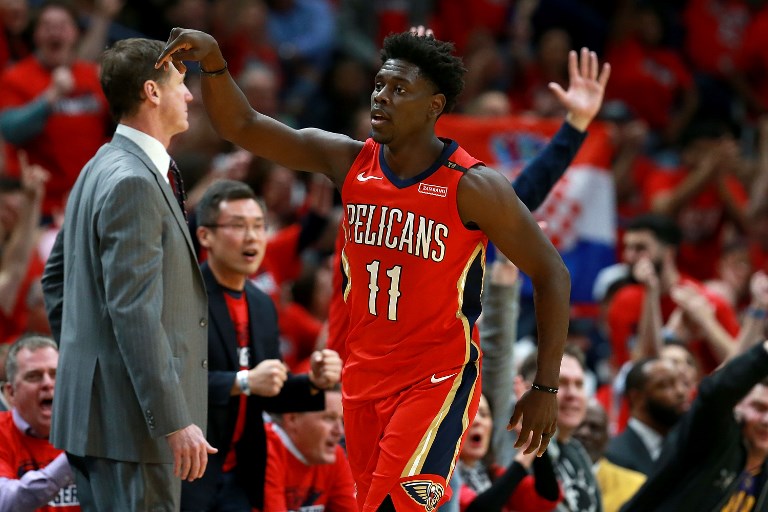 Even if you’re just tuning in to the NBA playoffs, chances are you already had predictions in mind for yet another year of world-class postseason basketball. Cavaliers in 6? Warriors in 5?

Sorry to burst your bubble, but the sixth-seeded New Orleans Pelicans are already up 3-0 against the third-seeded Portland Trailblazers. No, they still don’t have DeMarcus Cousins, and they never will until next season. Yes, Anthony Davis is still doing Anthony Davis things in the absence of Cousins, like averaging 28.3 points, 12.3 rebounds, 2.7 blocks and 2.3 steals.

Anyone could easily say from the stats that Davis is carrying the Pelicans yet again on his back. But in reality, it’s really the resurgence of former Philadelphia 76ers All-Star Jrue Holiday that made all of this possible, and here’s why.

(statistics by Basketball-Reference.com, unless otherwise stated)

Last year, Houston Rockets superstar James Harden euro-stepped to even bigger heights when head coach Mike D’Antoni decided that he would play point guard instead of his natural shooting guard position. This successful push out of a comfort zone seemingly inspired Pelicans’ head honcho Alvin Gentry, who decided that he’d play the 6-foot-4 Holiday as their primary SG after the arrival of pure point man Rajon Rondo.

Like Harden, the position shift worked wonders for Holiday, as he no longer had the burden of creating plays when his biggest strength had always been his lights-out scoring. The numbers don’t lie, either.

Last season, Holiday as a PG averaged 15.4 points and 7.3 assists on 45.4% shooting. Not bad for someone who has had a reputation for always being banged up by injuries. Meanwhile, for this season, Holiday’s norms as an SG skyrocketed to 19 points per game on a more efficient 49.4% clip. His assists average dropped to 6 a game, but who cares? That’s not his job anymore. Keep in mind that this was also Cousins’ first full(ish) season as a Pelican, so ball touches didn’t come by as easily.

It’s safe to say that the changing of the guards in Mardi Gras City had been a can’t-miss party.

Much has been said about Holiday’s offense, but people are only now noticing the impact he has on the other end of the court. Take it from his own coach:

Alvin Gentry on Jrue Holiday: “With Kawhi Leonard not playing, I’m not sure there’s a better two-way player in the game.”

“But of course his coach is biased for him,” you may say. Well, here’s longtime NBA analyst Sekou Smith:

If you didn’t know already, Jrue Holiday is an absolute problem. And the most underrated two-way player in the league.

Still, words can only do so much. Again, the numbers tell the whole story. Over the last two seasons, Holiday has quietly averaged 1.5 steals and 0.8 blocks per contest. For the entire 5 years of his stay in the Pelicans, meanwhile, Holiday (160 total blocks) has cracked the list of the top 5 guards with the most rejections – a list that includes household names like Dwyane Wade (180), John Wall (238) and James Harden (228). Just for the record, Harden has been playing defense for the last 5 years while people kept joking that he doesn’t.

Also, back to more recent contexts, here’s another stat courtesy of Basketball Forever:

Here is that stat in real-time action:

We are at a time where Jrue Holiday and Rajon Rondo are outplaying the All-Star duo of Damian Lillard and CJ McCollum.

Apparently this year, “Dame Time” fell on a Holiday, and he’s about to work some overtime. – Rappler.com