Apr 21, 2018 10:33 AM PHT
Agence France-Presse
Facebook Twitter Copy URL
Copied
After the changing of the guard, the Gunners may just find themselves back in the European football elite 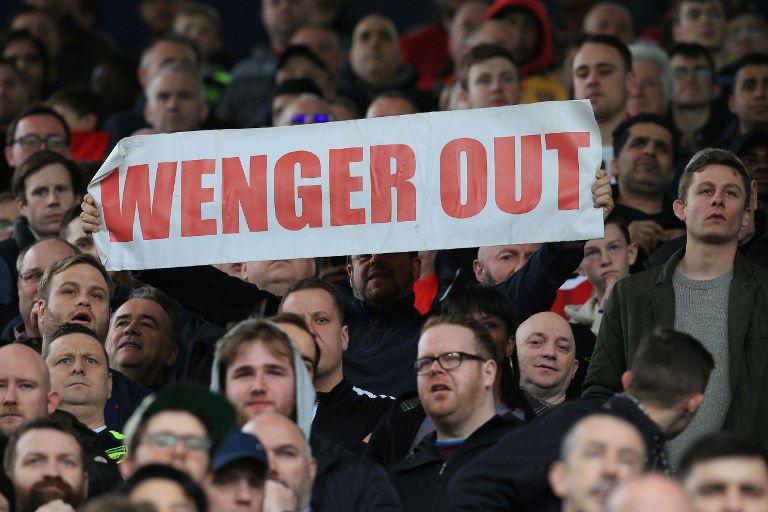 LONDON, United Kingdom – Arsene Wenger’s decision to step down as Arsenal manager after 22 years in charge marks the end of an era, but also a huge opportunity for the Gunners to reestablish themselves among the elite of English and European football.

Tributes poured in from players past and present on Friday, as well as Wenger’s adversaries over the past two decades, such as Alex Ferguson and Jose Mourinho, for his longevity and the revolution in English football he helped inspire.

However, there is no hiding the fact the Frenchman has bowed out now due to increasing calls for him to go from frustrated fans as Arsenal slipped further behind their Premier League rivals in recent seasons.

Arsenal haven’t won the league since Wenger’s crowing achievement in leading “The Invincibles” to an unbeaten league season in 2003/04.

Last season was the first time in 20 years the club didn’t qualify for the Champions League, but they haven’t got beyond the last 16 in that competition since 2010.

Languishing in sixth, Arsenal are also on course for their worst-ever league finish under Wenger this season with any hope of Champions League qualification dependent on winning the Europa League.

The club’s Chief Executive Ivan Gazidis made a long and heartfelt homage to Wenger himself when addressing the media on Friday, but dodged the question several times when quizzed over whether Wenger had walked on his own terms before he was pushed by the board.

And Gazidis recognised a decision had to be reached before the season’s end to give Arsenal a head start of finding Wenger’s successor.

“It’s going to be a condensed summer with a World Cup in the middle and a shortened transfer window, so I think for all of us having that clarity sooner is better,” he said.

Gazidis confirmed Arsenal will look for an offensive-minded coach to follow in the footsteps of Wenger’s philosophy.

“It is important to me we continue the football values that Arsene has instilled in the club,” he added.

“I want to see somebody who will continue that for our fans…they want to see aggressive, exciting football that gets people interested and excited in the games we play.”

Getting the fans back onside and back at the Emirates Stadium is a number one priority.

Arsenal fans pay the highest season ticket prices in the Premier League and rising discontent with Wenger has been clearly shown in vast swathes of empty seats for home games since an abject 3-0 League Cup final defeat against Manchester City in February.

There is huge pressure on a beleaguered board, led by unpopular American majority shareholder Stan Kroenke, to make the right call.

While Wenger’s reign has meandered to a disappointing end, Arsenal’s rivals have surged ahead by recruiting some of the best managers in the world in Pep Guardiola (Manchester City), Jose Mourinho (Manchester United), Jurgen Klopp (Liverpool), Mauricio Pochettino (Tottenham) and Antonio Conte (Chelsea).

In spite of Arsenal’s struggles on the field in recent seasons, they remain the sixth richest club in the world, according to financial consultants Deloitte’s annual Football Money League.

Wenger’s reluctance to fold to the booming inflation in football transfer fees and wages was often used as a shield by the board for not splashing out despite huge cash reserves.

That excuse has now also disappeared ahead of what promises to be a summer of transition at the Emirates. – Rappler.com