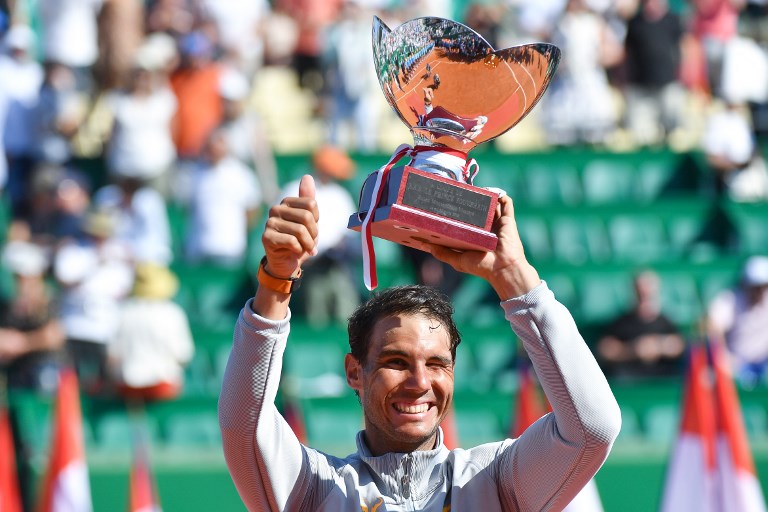 MONTE CARLO, Monaco – Rafael Nadal said he’s looking to carry the momentum from his 11th Monte Carlo Masters title into the rest of the clay-court season after beating Kei Nishikori in Sunday’s final.

The world number one showed no signs of rustiness in Monaco as he raced through his first ATP tournament since January without coming close to dropping a set.

The 31-year-old will now turn his attention to upcoming bids for 11th titles in Barcelona and at the French Open.

“Today is a day to enjoy this because winning a tournament like this one doesn’t happen every day.

“But tomorrow I need to start being focused on the next week. It’s not the moment to stop and disconnect your mind.

“It’s the moment to stay focused and to keep holding that good momentum after winning seven matches in a row on clay now this year.”

Nadal only returned from a hip injury in Spain’s Davis Cup quarter-final against Germany earlier this month, where he won both of his singles matches in straight sets.

The Spaniard had retired from his Australian Open last-eight clash with Marin Cilic in January, but showed no signs of fitness problems in Monte Carlo.

“I hope to have the chance to be healthy for the whole clay-court season. That’s it, yeah, it’s an important beginning.

“My goal is always the same thing – to be healthy, because if I am not healthy, I cannot have any goals.”

Time to say goodbye is closer

The victory kept Nadal ahead of Roger Federer at the top of the world rankings and was also an outright record 31st Masters title, pulling him out of a tie with Novak Djokovic.

Twenty-four of those successes have come on clay, on which Nadal has now won 36 consecutive sets.

The 16-time Grand Slam champion said that he’s just trying to enjoy every moment of the latter part of his career.

“My true feeling is that these kind of things are not going to happen forever, so I just try to enjoy and to play with full passion and with full energy and concentration, full love for the sport for as long as I can,” he added.

“I know the day to say goodbye is closer than 10 years ago.

“It’s something that I am not worried about, but it’s a real thing. So I’m just enjoying every day and trying to play with the best attitude possible, to keep being happy playing tennis.”

Nadal extended his Open-era record as the man to have won the most titles at the same event, having first won in Monaco as an 18-year-old in 2005, and he knows it will be a hard mark for future players to beat.

“Eleven titles here, it’s unbelievable, so… It’s something difficult to imagine,” he said.

“I always say the same: If I did (it), somebody else can do it. But it’s very difficult.

“I really don’t know how these things can happen because it’s a lot of years without making mistakes and without being unlucky on this week (in Monte Carlo). I have been unlucky other weeks, but not this week.”

No player managed to take more than five games off Nadal in his five matches this week, and he will head into the rest of the clay-court season justifiably as the man to beat, arguably for the 14th year in a row. – Rappler.com