Apr 23, 2018 8:26 PM PHT
Mars G. Alison
Facebook Twitter Copy URL
Copied
The scorching heat and the shorter course did not prevent the South African and Austrian from keeping their titles 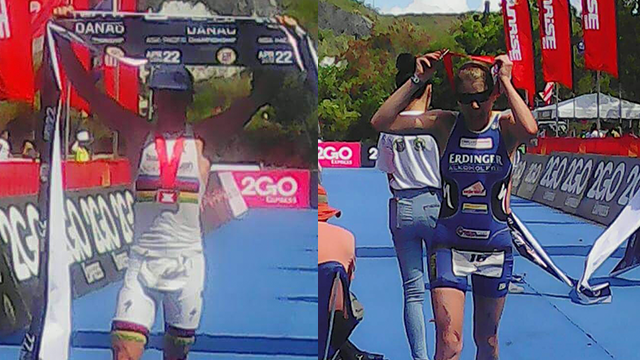 CEBU, Philippines – The heat did not stop XTERRA World champion Bradley Weiss of South Africa and Carina Wasle of Austria from retaining Sunday, April 22 their respective titles in the second edition of XTERRA Danao, an off-road triathlon series.

The organizing Sunrise Events shortened this year’s course after several participants complained that the 2017 inaugrual race was too technical. The change made for a faster and more intense competition under the scorching heat of the sun.

“It was so hot, I just want it to be over,” said the 29-year-old Weiss, who crossed the finish line in two hours, 16 minutes and 28 seconds, managing a 49-second lead over New Zealand’s Sam Osborne.

Osborne again settled for second place after he lost time in the bike phase when he punctured a tire and slipped at the turnaround.  He lost a few minutes as he had to untangle his bike from the yellow tape that marked the trail. His final clocking was 2:17:17.

Weiss was third to get out of the water behind Australia’s Ben Allen and Osborne for the opening 1.5-kilometer swim phase of the race. He, however, made up for it in the 28-kilometer biking section and maintained his lead in the 8K run that ended the gruelling race.

“The course last year suited me a little bit more but I prefer this race because it is hard and intense and the gaps are short between racers making it more exciting for the racers as well as spectators,” said Weiss.

Organizers have taken out the hilly and steep portions of the biking and running sections but it still didn’t make it any easier for the racers especially under the heat.

“The run was a challenge even though it was only 8, it felt like 28, it doesn’t ever let up,” said Weiss.

Salvaging third place was Keiran McPherson, who is also from New Zealand, for a repeat of the top 3 finishers in last year’s inaugural XTERRA Danao. McPherson finished in 2:19:47.

Allen, who was not able to sustain his good swim start, landed fourth with a time of 2:23:48.

XTERRA Danao first timer, Fabien Combaluzier of France, rounded up the top 5 after he breasted the tape at  2:25:35.

In the distaff side, Wasle too found the heat too tough to handle as she came from Europe which was just coming out of winter.

“It was a very hard race, it was very hot out there, I’m just happy that I made it to the finish,” said Wasle who retained her title with a time of 2:49:38.

It was also a 1-2 repeat in the women’s pro as Wasle managed to once again hold off Australia’s Penny Slater, although the latter was more close this time as she was just  three minutes behind with her time of 2:52:38.

According to Wasle, she was fortunate that the course was shortened although it made for a faster race.

“When it’s shorter you’re faster. The run was very hard.”

Third place went to France’s Jacky Boisset who completed the race with a time of 2:54:56.