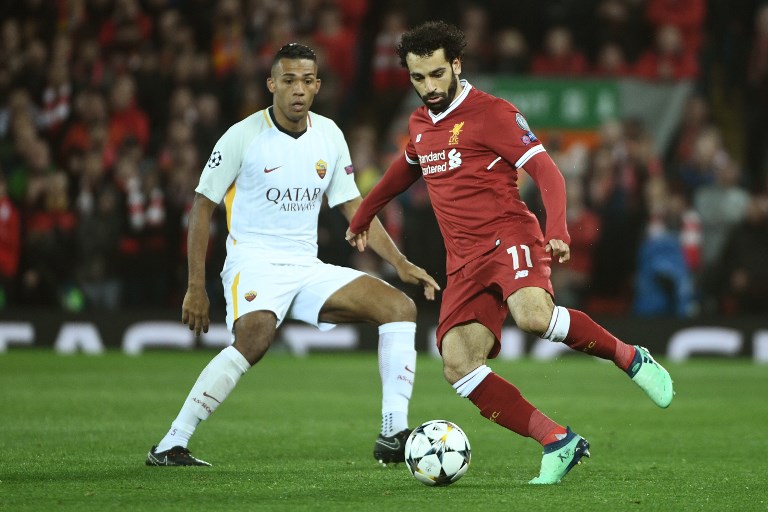 LIVERPOOL, United Kingdom – Liverpool manager Jurgen Klopp labelled talisman Mohamed Salah a “genius” as the Egyptian came back to haunt former club Roma in spectacular style with two goals and two assists in a 5-2 semi-final, first-leg demolition of the Italians at Anfield.

However, Liverpool’s night was soured by the concession of two late away goals and a serious injury to midfielder Alex Oxlade-Chamberlain that looks set to end his season and World Cup chances with England.

Roberto Firmino also scored twice and Sadio Mane netted Liverpool’s other goal to make up for missing a series of gilt-edged chances as the scoreline did anything but flatter the hosts.

“He’s outstanding, pretty much you can’t defend (against him),” said Klopp of Salah.

“The first goal is a genius strike. He scored already a few like this and that makes it even more special because it makes it no coincidence.”

Roma produced one of the finest comebacks in Champions League history by overturning a 4-1 first-leg deficit against Barcelona in the quarter-finals.

They will need to do the same in the return leg on May 2, but the visitors were at least given a lifeline when Edin Dzeko and Diego Perotti grabbed two vital away goals in the final 10 minutes.

“This reaction is welcome because we give meaning to the return match,” said Roma coach Eusebio Di Francesco.

“This was the first semi-final for Roma after three decades, we are not used to playing this level of opposition but this tie is not over. We have done it before. Whoever doesn’t believe in this comeback can stay home.”

Liverpool will rue its missed chances and poor late defending, but remains well on course for a first final in 11 years.

“Since I arrived Liverpool always had to take a slightly more difficult way, but, in the end, mostly still a successful way and that’s what we will try in Roma,” said Klopp. “It is still a very positive result tonight.”

The hosts’ early rhythm was disrupted when Chamberlain was stretchered off with what Klopp described as “probably a really bad injury”.

Moments later, the visitors were inches away from the opener when Aleksandar Kolarov’s long-range strike slipped through the grasp of Loris Karius and came back off the crossbar.

However, Liverpool soon settled and should have put the tie beyond doubt before half-time.

Mane blazed over when clean through on goal and then skewed wide when teed up by Firmino.

Roma has now lost its last four Champions League away games – shipping 13 goals in the process – and was punished by the man it sold to Liverpool for what now seems a bargain of 42 million euros (£37 million, $52 million) last year.

Nine minutes of the first half remained when Salah picked the ball up just inside the Roma area and was given far too much time by Juan Jesus to cut inside onto his favoured left foot and curl the ball with unerring accuracy into the top corner.

Brazilian number one Alisson has been in stunning form but even he was powerless as Salah struck again in first-half stoppage time with a trademark dinked finish over the advancing ‘keeper.

Chasing a first ever Champions League hat-trick, Salah would have been forgiven for going for goal as he bore down on Alisson once more 11 minutes into the second period.

But he showed why he is considered one of the game’s more unselfish superstars by squaring for a relieved Mane to convert from close range.

Salah wreaked more havoc five minutes later when he sped past the helpless Jesus and pulled the ball across goal for Firmino to tap home.

Firmino then rose highest to head in James Milner’s corner to take Liverpool’s fearsome front three’s combined tally for the season to 88 goals.

Roma’s night seemed to be summed up when midfielder Kevin Strootman and coach Di Francesco became engaged in a blazing row after the fifth goal went in.

However, Klopp’s decision to withdraw Salah 15 minutes from time backfired as the tie swung back Roma’s way in the final stages.

Firstly, with nine minutes left, Dzeko slotted home his 21st goal of the season as Lovren got caught underneath the ball.

Moments later, Anfield was stunned when Milner was punished for handball inside the area and Perotti coolly slotted home the resulting penalty. – Rappler.com