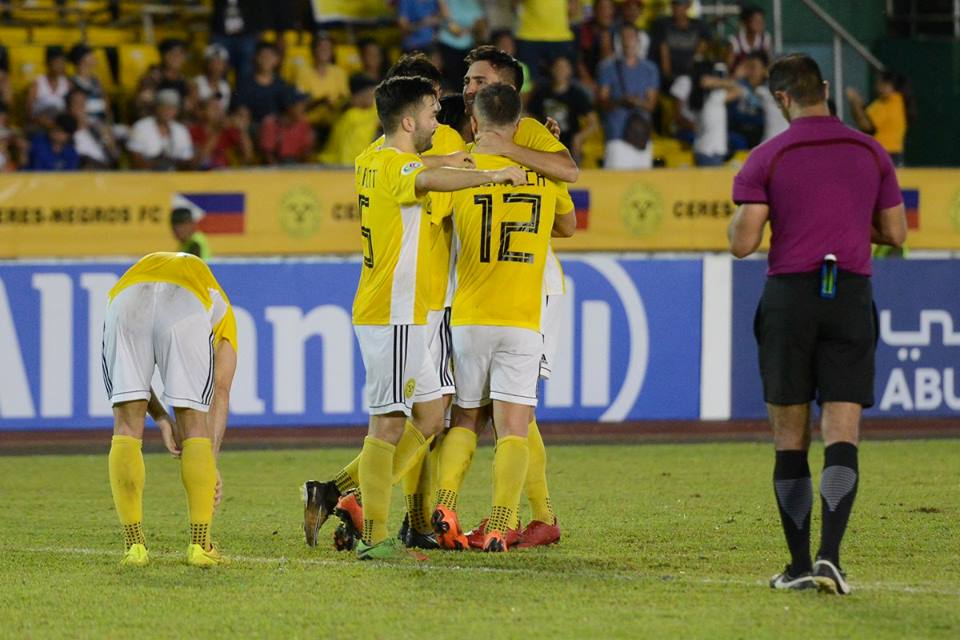 Despite having less chances throughout the game, Izzdin Shafiq converted a shot towards the center of the goal off a free kick in the 80th minute.

The last straw came when Sean Kane committed a hard foul in the penalty area and Song Ui-young converted from the spot to send Ceres tumbling to its first loss of the tournament.

Ceres and Home United have 13 points apiece, but the Singaporeans overtook the Busmen to stand on top of Group F based on the criteria of points from head-to-head matches between the two teams.

Both teams were guaranteed spots in the ASEAN zonal semi-finals based on the Persija 4-2 win over Tampines Rovers on Tuesday, April 24.

The Bacolod-based team failed to capitalize on its 70% possession and made a total of 530 passes compared to Home United’s 198.

“In football, everything like that happens as we have seen today. They did not do anything to win, but they won,” said forward Bienvenido Marañon about Ceres’ more dominating numbers.

FULL-TIME | Ceres Negros (PHI) 0-2 Home United FC (SIN)@HomeUtdFC wins away from home to finish ahead of @CeresNegrosFC in Group F! The home side will also advance as the best runner-up!#AFCCup2018 #CRNvHMU pic.twitter.com/fumYRebEoK

Ceres’ main striker also admitted that the loss was a “small mistake” of the Busmen, as they were caught on an off day.

“For today, it’s a small mistake as they [Home United] are lucky we lost but it’s okay, it’s football,” said Marañon.

In the 7th minute, Omid Nazari’s free kick from outside the box was deflected by the woodwork. Sean Kane caught the rebound, but headed it over the bar.

The Busmen’s greatest chance of the first half came at the 31st minute when Stephan Schrock fired a shot from the right edge of the 6-yard box, but Home United keeper Rudy Khairullah made a save.

The visiting team looked dangerous in the 36th minute as Fazli Ayob attempted a through ball and Shahril Ishnak was caught offside.

Ceres continued to dominate the second half, threatening Home United with chances in its box. In the 53rd minute, Schrock’s corner kick found Bienve Marañon, who headed the ball wide from the center of box.

Ayob conceded a free kick in the 54th minute that greatly tested the Singaporeans’ defense. Home United blocked Sean Kane’s right-footed shot from the right side of the box and Khairullah saved Marañon’s left-footed shot towards the center of the goal within the 55th minute.

Marañon’s frusrations continued in the 77th minute as he connected Nazari’s cross with a header, but it sailed over the bar.