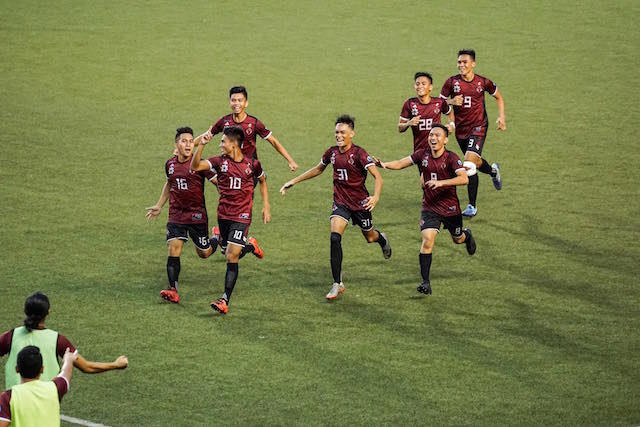 MANILA, Philippines – The University of the Philippines (UP) Fighting Maroons are back in the title round after defeating the De La Salle University (DLSU) Green Archers, 1-0, in the UAAP men’s football semi-finals on Thursday, April 26.

In the 47th minute, Kyle Magdato slotted the ball past DLSU keeper Paeng de Guzman from the center of the box via an assist from Kintaro Miyagi.

After finishing as top seeds, the Fighting Maroons are given another chance to reclaim their Season 78 title, which they failed to defend after losing to Far Eastern University, 2-1, in the semis.

UP head coach Anto Gonzalez was satisfied with the win, but heading into the finals, he wants the Fighting Maroons to find their “killer instinct.”

“We have to learn how to have that killer instict. I think when we scored the first goal, we stopped attacking really. That’s why nabuhayan pa yung La Salle kasi  they were pressing. (That’s why La Salle was able to rally back because they were pressing),” said Gonzalez

“But overall, we should be happy with the performance.”

In the first half, UP threatened with more close range shots which were saved by Paeng De Guzman to keep the scoreline blank.

DLSU’s greatest chance came at the 33rd minute when the Green Archers won a free kick as Jose Clarino was called for hand-ball violation. Paolo Perez took the free kick that sailed over a bar.

After opening the scoreline in the 47th minute, UP attempted to double the lead between the 75th and 78th minute. Miyagi ignited the offense by breaking away from the clogged midfield and fired a shot that sailed over the bar.

Roland Saavedra and Fidel Tacardon tried to convert their consecutive chances that were denied by De Guzman.

Miyagi attempted a last gasp to double the score during the added time, but his shot hit the woodwork and UP failed to make a rebound. – Rappler.com