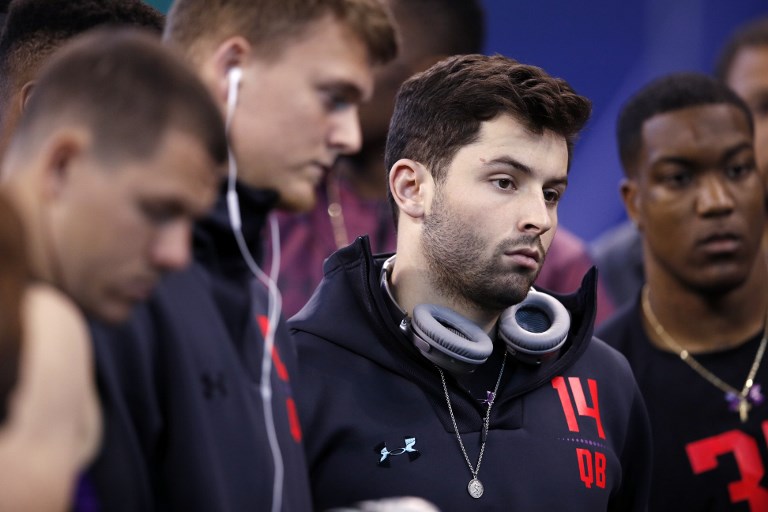 The Cleveland Browns chose Mayfield to kick off the first round of the draft which is considered one of the deepest in recent history for quarterbacks as 4 of the top 10 players taken were QBs.

The 23-year-old Mayfield is expected to eventually become the playmaking cornerstone for the Browns, who also have Tyrod Taylor and Drew Stanton at the quarterback spot.

“With Baker Mayfield, we have a guy who loves the game of football, who is an ultra-competitor, is revered by his teammates and anybody who has ever been around him,” Browns GM John Dorsey said.

“He’s a guy that has earned everything he has ever had since high school to college and now up here. He is a winner, he’s competitive.”

The US colleges are the biggest supplier of players to the NFL and the entry draft is the most common player recruitment tool for the league.

The Browns had been expected to take a quarterback with the top pick but heading into the draft there was no consensus on who the No. 1 pick should be.

Cleveland also had the fourth pick in the draft and chose to take cornerback Denzel Ward of Ohio State.

The Buffalo Bills traded up from the 12th spot to No. 7 to select embattled quarterback Josh Allen who got in hot water earlier Thursday for some racially charged social media tweets he made as a teenaged high school student. Allen apologized on Thursday.

The confident and charismatic Mayfield did not attend the draft at the Dallas Cowboys’ stadium in Arlington, Texas, choosing instead to watch it on TV at his family home in Austin, Texas.

Mayfield will be tasked with turning around the Browns team that finished 0-16 last season.

He had a superb college career at the University of Oklahoma but also got some unwanted attention off the field, including being arrested in 2017 in Arkansas on charges of public intoxication, disorderly conduct, and resisting arrest. He reached a plea deal in June and paid a series of fines.

Cleveland holds the longest active post-season drought, dating back to 2002. The Browns are known for having a revolving door on their quarterback position. Since 1999 they have had a league-leading 28 different starting quarterbacks.

The Giants wasted no time picking Barkley in the No. 2 position.

Barkley is considered the complete running back package, possessing a combination of speed, strength and solid character.

The Jets like to think they got a steal with quarterback Darnold in the third spot.

Several scouts had Darnold listed as the top pick overall so when Cleveland and the Giants passed on him the Jets pounced.

“I’m taking it head on,” Darnold said. “I’m a pretty confident guy and I’m really comfortable in my own skin, so I’m going to go in there, do my thing and do what the coaches ask me to do — and do that at the highest level.” – Rappler.com