Celtics miss chance to close out as Bucks score 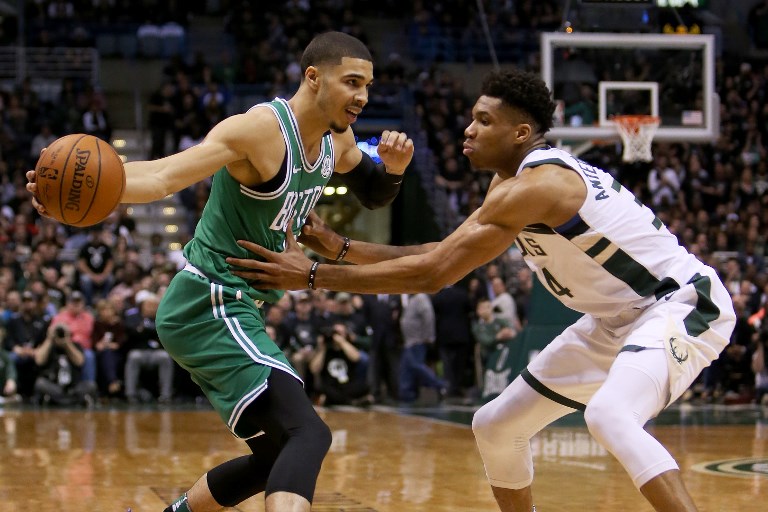 MILWAUKEE, United States (UPDATED) – Giannis Antetokounmpo scored 31 points to lead Milwaukee to a 97-86 victory over the Boston Celtics on Thursday, April 26, that kept the Bucks alive in the NBA playoffs.

With the victory Milwaukee forced a winner-take-all Game 7 on Saturday in the Eastern Conference first-round series.

“That’s what we did tonight – we moved the ball really well. We were disciplined.”

Antetokounmpo, the Greek forward whose blend of size and skill have made him a rising star in the NBA, bounced back from a series-low 16 points scored in the Bucks’ game five loss with a dominant performance.

He added 14 rebounds, four assists and two steals, scoring 10 of Milwaukee’s last 19 points as they pulled away in the waning minutes.

Khris Middleton and Malcolm Brogdon added 16 points apiece for the Bucks, who lost an elimination Game 6 on their home floor last year.

“We’re a better team now,” Antetokounmpo said. “We have a big opportunity ahead of us.”

But to reach the second round they’ll have to do what neither team has done in the series – win on the road.

The winner of the series will face Philadelphia in the second round. The 76ers beat the Miami Heat 4-1 in their first-round series.

The Celtics looked determined to bring the series to an end as they built a nine-point lead in the first quarter.

But the Bucks took the lead in the second quarter, using a 14-2 scoring run to take a 48-39 halftime lead.

They expanded the lead to as many as 14 points in the third before Boston surged back, knotting the score on Jayson Tatum’s layup that capped a 20-6 run.

The Bucks responded and were nine points up again going into the fourth.

Boston closed within two with 7:20 remaining.

Over the next six minutes, however, the Celtics

Boston’s offense was doing everything right during the opening four and a half minutes of the final frame. At one point, the C’s scored on four consecutive possessions –- the final of which allowed them to pull within two points to make it 80-78 with 7:20 remaining.

After that point, however, the ball movement ceased for the C’s, and they shot just 1-of-9 from the field during the next six minutes of play.

“I thought any time we got stagnant, we weren’t very good,” Celtics coach Brad Stevens said.

“Clearly their speed and length and athleticism affected us,” added Stevens, whose Celtics were out-rebounded 48-39. “They were quicker to the ball all night than us.” – Rappler.com