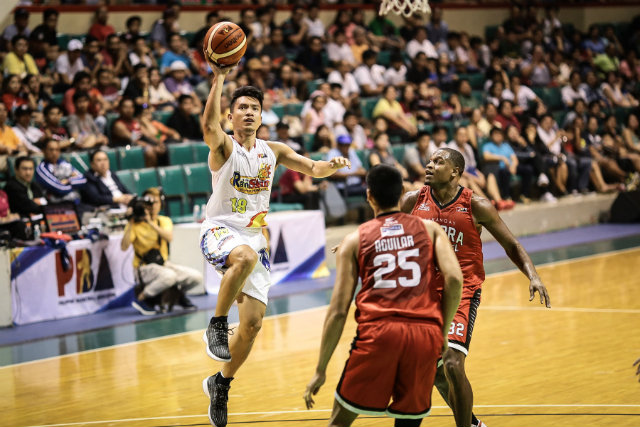 MANILA, Philippines – James Yap has been so used to controversies surrounding his life, so even the latest tirade of his ex-wife Kris Aquino hasn’t really prevented him from staying focused on his job as a PBA player.

Yap’s name was put into the spotlight again earlier this week when Aquino posted a lengthy statement on her social media accounts – Facebook, Twitter and Instagram – after the 36-year-old cager’s current partner and son was featured on Korina Sanchez’s program, Rated K.

Aquino went on a social media tirade on Yap, calling him a “deadbeat na tatay (father)” of her son Bimby, and Sanchez, whom Aquino referred to as just “misis ni (wife of) Mar Roxas.”

“Sanay na (I’m used to it),” said Yap while laughing when asked how he keeps his focus amid the off-court controversies.

Despite the social media storm, the former two-time league Most Valuable Player remained in the zone in his first game in the 2018 PBA Commissioner’s Cup.

Yap helped the Rain or Shine Elasto Painters survive the Alaska Aces in overtime, 109-103, in their conference-opener by chipping in 10 points, 3 rebounds, two assists, a steal and a block on Friday, April 27.

Talking about the game, Yap, who is now in his 14th year in the PBA, said Rain or Shine’s overtime triumph will help the team progress.

(This is the kind of game where we can measure if we are ready. This game is a good thing because it’s a close one and we can develop our teamwork and confidence in ourselves.)

Yap and the Elasto Painters will try to remain on the winning track when they face Barangay Ginebra on Sunday, April 29, at the Araneta Coliseum. – Rappler.com