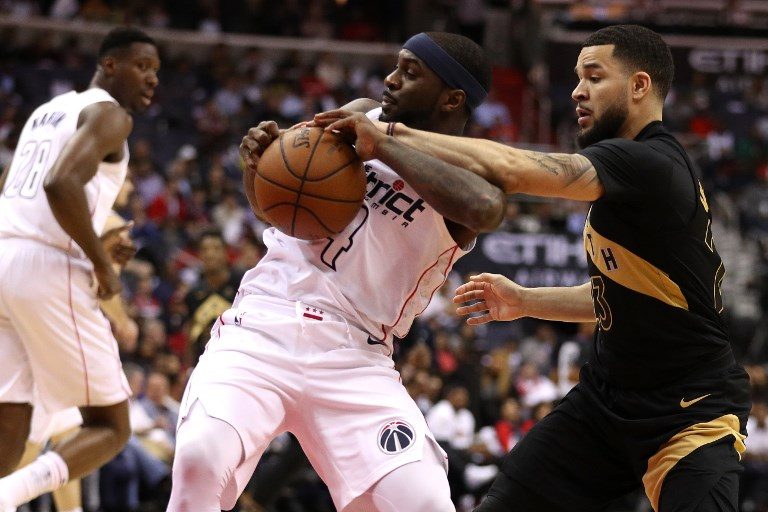 WASHINGTON, United States (UPDATED) – The Toronto Raptors punched their ticket to the second round of the NBA playoffs on Friday, April 27, with a 102-92 victory over the Washington Wizards.

The Raptors notched the first road win of the Eastern Conference first-round series to eliminate the Wizards, 4-2.

Kyle Lowry scored 24 points to lead the Raptors, who trailed by five going into the fourth quarter but outscored the flagging Wizards 29-14 in the final period.

DeMar DeRozan added 16 points and Jonas Valanciunas chipped in 14 for Toronto, who will face either the Cleveland Cavaliers or Indiana Pacers in the second round.

The Raptors bench was crucial to the comeback.

Toronto’s reserves outscored Washington’s bench, 21-6, in the second half while out-rebounding them 15-3.

“Our bench did a great job,” Lowry said. “I played 31 minutes. Demar played 33. In a playoff game, a closeout game, you would never think your stars could do that.

“But that’s how our team is built.”

Jakob Poeltl was a strong defensive presence and chipped in seven points and seven rebounds.

“He’s the engine, the toughness, that little birdie on the shoulder,” Casey said. “I thought it really propelled Pascal and those other guys to give them a sense of confidence.”

Bradley Beal paced the Wizards with 32 points and John Wall added 23, but it wasn’t enough for a Washington team that coughed up 14 turnovers and connected on just four of 16 shots from the field in the fourth quarter.

Wall missed all four of his shots in the fourth as the Raptors rallied to reach the second round for a third straight season. – Rappler.com