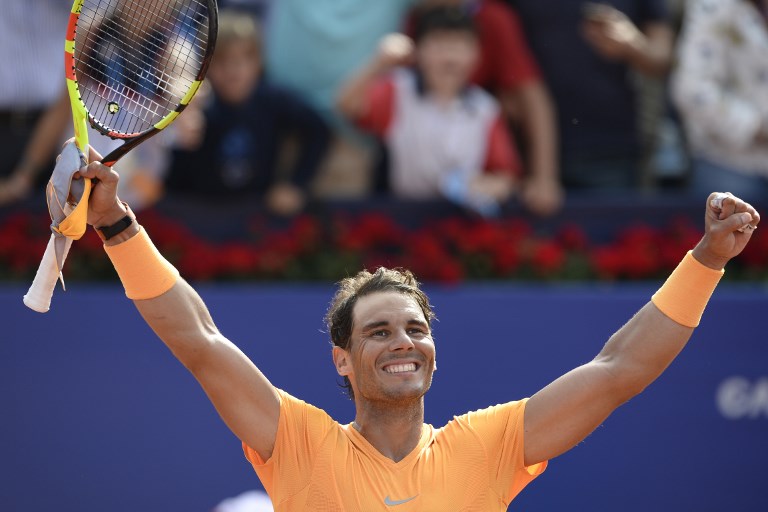 BARCELONA, Spain – Rafael Nadal racked up the 400th clay court victory of his career on Saturday, April 28, as he swept past Belgium’s David Goffin 6-4, 6-0 to reach the Barcelona final and stand just one win from an 11th title in the Spanish city.

World number one Nadal also extended his winning streak on clay to 44 consecutive sets as he downed Goffin for a third time in three meetings on the red dirt surface he has dominated for more than a decade.

“I played I think my best match of the tournament so far, no doubt about that. It was a great first set in my opinion. Both of us played at a very high level.”

Nadal slipped a break down at 0-2 to 4th seed Goffin in the first set on Saturday but that was the only blip on his afternoon.

Goffin saved two match points in the 6th game of the second set but a weary forehand went long on the 3rd and Nadal celebrated with fists punched to the sky.

Nadal’s 400 wins on clay is the fourth best of all time with Guillermo Vilas of Argentina a long way ahead with 659 while Spain’s Manuel Orantes won 502 and Austria’s Thomas Muster racked up 422.

However, Nadal has lost just 35 times on clay in his career, easily giving him the best winning return of 91.9%.

Since his first tour-level clay-court victory over Karel Kucera of Slovakia at the 2003 Monte Carlo Masters, Nadal has also collected 54 clay court trophies.

Ten of those have come at Roland Garros, providing the bulk of his 16 Grand Slam titles.

Nadal said he will not under-estimate Tsitsipas in Sunday’s final.

“Stefanos is a great player. Always the young players have something special and he’s playing with big confidence,” said the top seed.

“He’s playing so well, so it’s going to be a very tough match. I need to be ready to play at the highest level possible.”

Tsitsipas, 19 years old and ranked 63, continued his magical run at the event reaching a first ATP final with a 7-5, 6-3 win over 5th-seed Pablo Carreno Busta.

The last Greek to make an ATP final was Nicholas Kalogeropoulos in Des Moines back in 1973. Tsitsipas is the youngest Barcelona finalist since Nadal in 2005.

“I couldn’t have enjoyed it more, I went onto the court and enjoyed every single moment,” said Tsitsipas. “I am very proud for myself and also I believe I made my country proud.”

Win or lose on Sunday, Tsitsipas will become the first Greek player to break into the world top 50 when the latest men’s rankings are released on Monday.

That was his second win over a top 10 player – Thiem is 7th in the world – following victory over Goffin during his best previous run to the semi-finals in Antwerp last October.

Yet to drop a set this week, Tsitsipas served 5 aces and won 78 percent of first serves to see off his Spanish rival in one hour 35 minutes. – Rappler.com