Apr 30, 2018 6:46 AM PHT
Agence France-Presse
Facebook Twitter Copy URL
Copied
'The King' flirts with a triple-double as Cleveland advances to the second round of the Eastern Conference for the 4th straight year 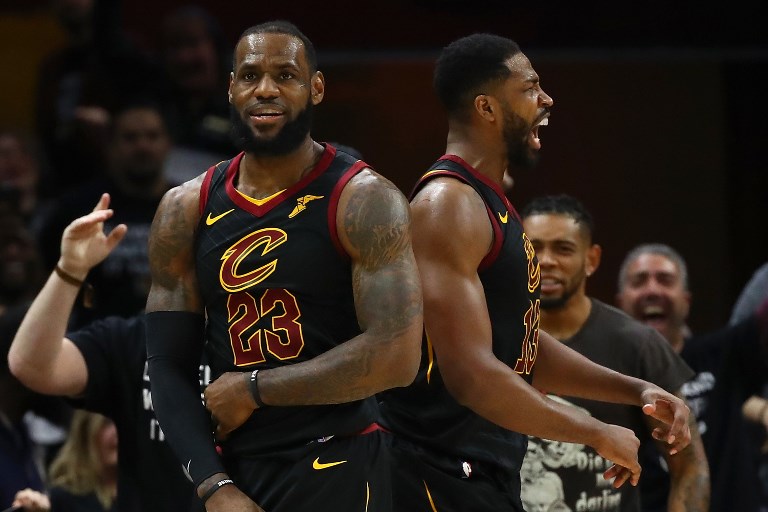 LOS ANGELES, USA – LeBron James exploded for 45 points to lead the Cleveland Cavaliers to a 105-101 victory over the Indiana Pacers on Sunday, April 19, and into the second round of the NBA playoffs.

Facing elimination in the first round for the first time, James produced his 3rd 40-point game of the series and also submitted 9 rebounds and 7 assists.

“I just try to do whatever it takes to help us win. I felt like I wanted to do that again in this series,” said James, who is now 5-2 in Game 7s in all rounds of the playoffs.

James becomes the first player in NBA history to reach those numbers in a Game 7! #WhateverItTakes | #NBAPlayoffs pic.twitter.com/hb7DSEG7k2

Humbled by the Pacers in Game 6, 87-121, Cleveland wrapped up the best-of-7 Eastern Conference series at 4-3 to set up a second-round clash with East top seeds Toronto.

James’ determination was evident from the opening tip-off.

He made his first 7 shots from the floor and finished the first half with 26 points, 5 assists, and 4 rebounds.

LeBron James' 45 points is the 2nd-most in a Game 7 win in playoff history.

2005 was the last time a team LeBron played for didn't make the Conference Semifinals pic.twitter.com/emshkW1iaT

The Cavaliers pulled down 11 offensive rebounds in the first half and while Indiana shot a respectable 54.8%, their 31 attempts from the floor were 17 fewer than Cleveland’s.

Leading by as many a 14 in the second quarter, Cleveland took a 54-43 lead into the break.

But the 3rd-quarter woes that have bedevilled them surfaced again.

After surrendering just one turnover in the first half, Cleveland coughed up 7, leading to 10 Pacers points, in the 3rd period.

Indiana took their first lead with 7:13 left in the 3rd when Bojan Bogdanovic’s 3-pointer gave them a 59-58 edge.

A determined Victor Oladipo scored 14 of his 30 points in the quarter, but Cleveland emerged with a 76-74 lead going into the final frame after James departed for the locker room with little more than a minute remaining, reportedly to address leg cramping.

Oladipo gets to the cup for 2 to cut it to 4 with :50.1 remaining!#NBAonABC pic.twitter.com/zOSfQIcxM2

Oladipo’s driving layup cut the deficit to 4 points with 50.1 seconds remaining but Cleveland, who had 15 points from Tristan Thompson, 14 from Kevin Love, and 11 apiece from JR Smith and George Hill, held on.

“We started the game with the guys that have been in big games before,” James said.

He praised Thompson’s performance, which included 10 rebounds, as “magnificent” and said the return of Hill, who missed 3 games with back spasms, provided a much-needed lift.

“There’s nothing like a Game 7,” Thompson said. “Game 7 separates the men from the boys.”

They provided plenty of support for the team’s superstar, who continued to rack up records.

He became the career playoff leader in steals when he picked off a pass in the second quarter. James had entered the contest tied with former Chicago Bulls great Scottie Pippen (395) atop the all-time postseason list.

Congrats to @KingJames of the @cavs for becoming the #NBAPlayoffs STEALS leader! #WhateverItTakes #ThisIsWhyWePlay pic.twitter.com/Orr3RoSEQa

James also became the first player to score 20 or more points 200 times in the playoffs.

“He put us on his back,” Lue said, “just scoring the basketball, facilitating, being aggressive. I think getting their bigs in foul trouble a lot throughout the course of this series by attacking the basket, just getting to the free throw line put pressure on their defense.”

“He did it all for us this series.” – Rappler.com