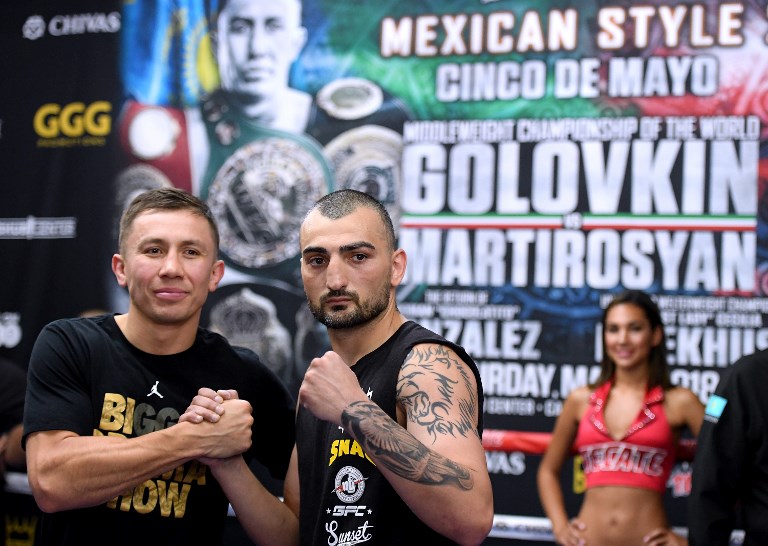 Golovkin, nicknamed ”Triple G,” tries to stretch his reign, which began in 2010, to 20 fights and equal Bernard Hopkins for the longest title run in middleweight history when he faces Armenian-born American Martirosyan.

“(It means) a lot. I feel like a star,” Golovkin said Monday. “If you check Bernard Hopkins, my record is much bigger, much stronger. This is a good situation for my career, for my fans.”

Golovkin was set for a Las Vegas pay-per-view showdown on the Mexican Cinco de Mayo holiday against Alvarez, a rematch of their thrilling draw last September.

But the Mexican tested positive for the banned substance clenbuterol and dropped out of the bout four weeks ago.

“He was extremely frustrated and disappointed when the positive test was announced,” said Golovkin promoter Tom Loeffler. “He had been training for the biggest fight in boxing and it was a big shockwave when it came.”

Alvarez is banned until August but hopes to fight again on September 16, another Mexican holiday, and maybe against Golovkin.

Asked about fighting Alvarez next if he retains his titles Saturday, Golovkin said, “Maybe. Why not? I want activity.”

If not Alvarez, then British southpaw Billy Joe Saunders, whose World Boxing Organization middleweight crown is the only one not held by Golovkin, and Ukraine’s Sergiy Derevyanchenko, Golovkin’s mandatory next International Boxing Federation challenger, would be likely next rivals.

But Golovkin, 36, made it clear he wants to break the record championship middleweight run, saying, “Next fight I’m looking in the middleweight division. It’s best for boxing and for us.”

Golovkin, 37-0 with one drawn and 33 knockouts, surrenders a height and reach advantage to the light-middleweight contender who is moving up in class.

“I’m not a big guy. If I’m shorter, don’t care,” Golovkin said. “This is boxing. I know my style. I know my fight. I think it’s more stronger. My style is more interesting.

“He’s a good fighter. I remember him from 2004 Olympic Games. He has good experience. I believe this is a good show for people and a big fight for us.”

‘This is what we dream about’

“I took the fight on short notice but we’re ready,” Martirosyan said. “You could wake me up and I’d be ready to fight. I can’t wait. This is what we dream about, these big fights.”

Golovkin trainer Abel Sanchez said his fighter was in the ring only a couple of hours after Alvarez was out, confident of another foe and planning for two more fights this year, Alvarez or not.

“Hopefully we fight in September and again in December. We want to fight as much as we can as long as we can,” Sanchez said. “He’s the most entertaining boxer in the sport today. We need to appreciate him while he’s here.” – Rappler.com