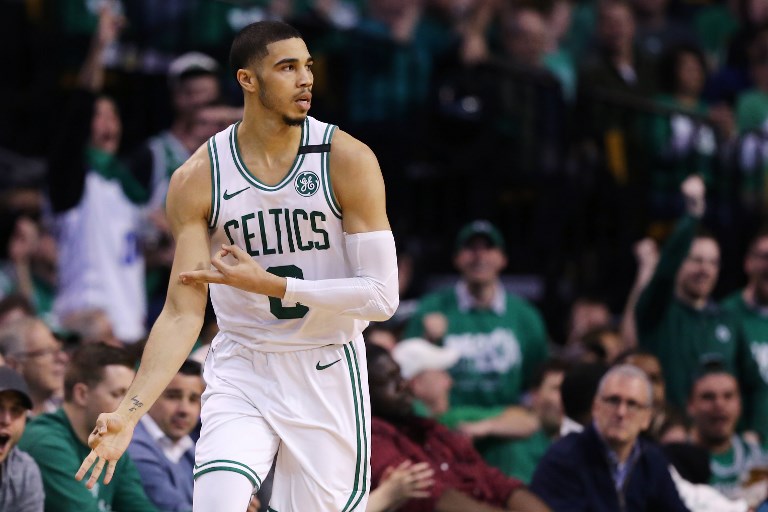 Rozier emerged as the top scorer in a dazzling Celtics offensive display at the TD Garden, with Al Horford and Jayson Tatum also making hefty contributions.

Horford finished with 26 points while Tatum added 28 points as Boston surged into a 1-0 lead in the best-of-7 series with a statement victory.

“It’s a great experience for him to come into a playoff game of this magnitude and have such a great game,” Horford added.

“I just think defensively we did a great job tonight, really containing them and just trying to play with pace at the other end.”

The third-seeded Sixers had advanced to the semi-finals after a confident demolition of Miami in the opening round.

But the Celtics lineup look to be a vastly more challenging proposition for the Sixers, who saw Joel Embiid top score with 31 points while pulling down 13 rebounds.

J.J. Redick had 20 points for the Sixers, while point guard Ben Simmons had 18 points from 41 minutes on the court.

Yet it was the shooting prowess of Celtics ace Rozier that caught the eye as the 24-year-old point guard kept Boston firmly on track for a well-earned win.

Boston, who advanced to the semi-finals after a gruelling 7-game series win over Milwaukee, have regrouped superbly after a slew of injuries which means they are without stars Kyrie Irving, Jaylen Brown and Gordon Hayward.

Rozier’s 29-point haul included 21 points from three-point range, a 77.8 conversion percentage from outside the arc.

“Up early every day. Putting in a lot of work, watching a lot of film. A lot of hard work over the summer,” Rozier said.

“We got together yesterday and we had a plan. No matter who it is out there, we’re going to play hard and take care of business.”

Sixers coach Brett Brown was left to reflect on a below-par night for his team while acknowledging the Celtics had simply been better.

“We did have an off night shooting but a lot of that you can attribute to their good defense and them getting to our shooters,” Brown said.

“We give them credit. I never really felt we were in the game. It sure felt like we were playing a good team today.

“But defensively, offensively, this isn’t who we are. This was a poor game from us. We’re going to have to fix some things.”