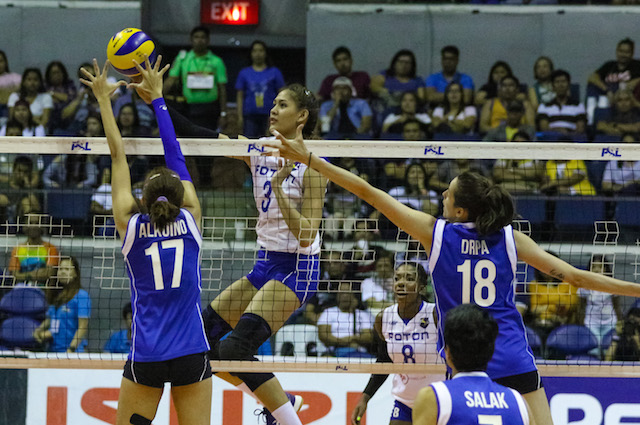 MANILA, Philippines – Katherine Bell engineered a furious fightback as Petron recovered from a sluggish start to stun reigning champion F2 Logistics, 23-25, 20-25, 25-15, 25-22, 15-9,  in Game 1 of the Chooks to Go-Philippine Superliga (PSL) Grand Prix finals on Tuesday, May 1, at the Smart Araneta Coliseum.

A late replacement for Hillary Hurley, Bell was at her best as she delivered the crucial blows for the Blaze Spikers, who drew the first blood in their best-of-three title showdown.

The Cargo Movers, however, still has a chance to even things out when they march to Game 2 on Thursday at the Filoil Flying V Centre in San Juan.

“We know the quality of her game and tonight, she showed that she’s up to the challenge,” said Petron coach Shaq Delos Santos of Bell, whose powerful performance in the 5th set completely broke the backs of the Cargo Movers.

American import Channon Thompson spewed fire down the stretch to star for the Tornadoes, who took their sweet time before going for the kill to essay a strong finish in this prestigious women’s club tourney.

With the victory, Foton emerged with a bronze medal to match its previous finish in the 2017  edition.

Thompson tallied 22 attacks, two blocks and two aces to finish with 26 points while Santiago chipped in 23 points for the Tornadoes, who ruled the Grand Prix in 2015 and 2016.

More than that, Thompson delivered the crucial hits that silenced the torrid assault waged by the Asset Managers down the stretch.

“That’s the reason why we hired her; she’s here to provide leadership,” said Abella, noting that it was Thompson who took the cudgels as the Asset Managers threatened to stretch the match into fifth set after turning a 13-20 deficit into 18-21 count.

“She’s been playing professionally since she was 16 so her experience really carried us in this match.

Serbian Marta Drpa knocked down 20 kills and 3 blocks while Sara Klisura battled a painful shoulder to score 14 points for the Asset Managers, who also matched their 4th-place finish last year.

However, the journey to the bronze wasn’t easy for the Tornadoes.

After finishing the classification round with a 5-5 win-loss slate, the Tornadoes made an upgrade as they recruited Thompson to replace American Brooke Kranda.

University of the Philippine stars Tots Carlos and Isa Molde joined late in the season to power them past Sta. Lucia Realty in the quarterfinals.

Despite the inclusion of National University stalwart Jaja Santiago, Foton still lost to F2 Logistics in the best-of-three semifinals to forge a do-or-die duel with Cocolife in the consolation round.

“(We had) a lot of hardships and a lot of ups and downs. But 3rd place is still third place. We’re still in the podium and that’s really our target. We want to match what we achieved last year,” said Foton coach John Abella, who also came in as a new coach replacing Moro Branislav.

“At least we hit our target. That’s the best thing about this conference.”– Rappler.com