Mar 1, 2012 10:54 PM PHT
Facebook Twitter Copy URL
Copied
"The University of the Philippines Varsity Pep Squad proved that they are at their best when they are at home" MANILA, Philippines – They have charmed and left audiences in awe here in the Philippines and abroad with their impeccable mix of athleticism and artistry.
But just like before, the University of the Philippines Varsity Pep Squad proved that they are at their best when they are at home.
Three months after finishing third in the 6th Cheerleading World Competition in Hong Kong, the UP Pep Squad wowed around 5,000 people in their thanksgiving concert entitled “Elev80’s” Wednesday night at the UP Theater.
The seven-time UAAP cheerdance competition champions, clad in costumes reminiscent of the 1980s, jived to the beats of artists from three decades back as they dazzled the audience with dance numbers from a wide array of forms, including classical ballet to hip-hop and jazz funk. 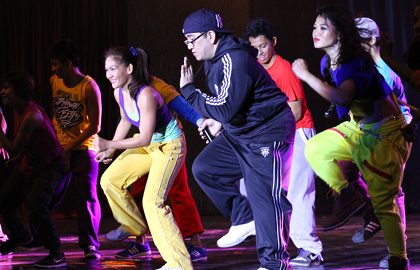 Fusion of art and skills
The two-and-a-half hour show kicked off with a reprisal of the team’s Madonna-themed performance — this time without the blonde dos — that won them the 2011 UAAP cheerdance crown as the crowd screamed aloud like they did at the Smart Araneta Coliseum last year.
Prof. Ruben Defeo of the Office of Initiatives for Culture and the Arts then paid tribute to UP Pep, noting that it was a “sumptuous” year for the squad that reaped victory after victory while also bringing pride to the UP community.
Defeo, who also heads the UP Public Information Office, added that the team, through its head coach Lala Perena, has perfected the fusion of art and skills, thereby producing not just athletes, but artists as well.

80’s hits galore
UP Pep alumni also took center stage and fired up the crowd with a medley that included 80’s hits Karma Chameleon by Culture Club, Katrina and the Waves’ Walking on Sunshine, Build Me Up Buttercup by The Foundations, and Whitney Houston’s Dance With Somebody.
Current members of the team joined the fray later and egged on the audience to dance with them to the tune of YMCA by Village People and We Are Family by Sister Sledge, much to the latter’s delight. After a ballet number done with the UP Dance Company, the squad went on to honor stars of the 80s like Tina Turner, Prince, David Benoit, Bon Jovi and Stevie Wonder as they jived to Flashdance (Irene Cara), Footloose (Kenny Loggins), Fame (Irene Cara) and I Need A Hero (Bonnie and Tyler).
Freshmen members of the crew also showed that UP Pep’s future is in good hands with renditions of hits by Michael and Janet Jackson.
With important events in history in the 1980s like the assassination and funeral of Ninoy Aquino and the People Power Revolution serving as background, the so-called “Pep Squad ng Bayan” delivered a touching take on Alphaville’s Forever Young before guest Jungee Marcelo of the Philippine Hip Hop Federation, sang and danced to Sa Yahweh, a song he composed that was popularized by Gary Valenciano.
Drummers from the past and present also took the spotlight when they presented Queen’s We Will Rock You, backstopped by a full band and with snare and bass drummers stomping to the beat. Stale ending
To cap off the evening, the UP Pep Squad unveiled their newest groove, the SUN Power Text Unlimited 200 Move — a nine-minute routine highlighted by gravity-defying tosses, stunning transitions and an eye-popping sequence with 10 1-1-1 pyramids toted high.
The ending, however, paled in comparison to how the show began as the commercial aspect of the number dampened what could have been a solid routine that gave fans and “scouts” alike a sneak peek of what the team is capable of doing in next year’s much-awaited cheerdance competition.
Watchful eyes also caught a handful of errors here and there, but it probably didn’t matter as much as it will in the deified UAAP contests, where a single fall can ruin a performance that take months to prepare for. UP Pep: World power
Elev80’s exhibited just how far the UP Pep Squad has gone, from relative obscurity to being an icon of innovation in cheerdancing and a “world power” to be reckoned with in their field.
And based on initial feedback to the enthusing and captivating show, the squad’s members have shown once more that they are at their best when they’re at home. – Rappler.com