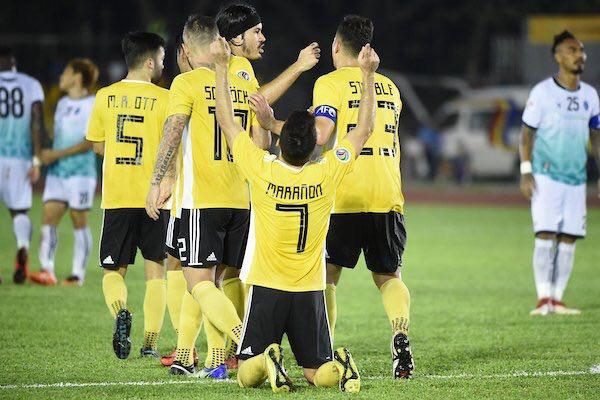 MANILA, Philippines – Despite losing the second leg, 2-3, to Yangon United, Ceres-Negros FC will advance to its second straight ASEAN Zonal Finals following a 6-5 aggregate win on Wednesday, May 16, at the Thuwunna Stadium in Myanmar.

The Busmen made a 4-2 statement win in the first leg in front of Filipino fans at the Pana-ad Park and Stadium last May 9 that gave the Bacolod-based squad enough cushion.

Manny Ott and Bienve Marañon scored valuable away goals in the 8th and 79th minute that allowed Ceres to survive Yangon’s late scare.

Schrock pounces on Yangon error and sets up Manuel Ott, who finishes the chance expertly.

Marañon broke the second half silence as he doubled the Busmen’s lead in the 79th minute with a shot from the left edge of the 6-yd box toward the near post.

That should be that! Maranon finishes in at the near post and seals Ceres spot in the ASEAN Zonal Final.

Three minutes later, the Ceres striker was immediately sent off the field after being booked with a red card for instigating a scuffle.

Marañon will not be able to suit up for Ceres in the first leg match against Home United.

Oh dear. Maranon sparks a brawl after taunting one of the Yangon players and has now been sent off!#YGUvCRN #AFCCup2018 pic.twitter.com/pNI2P7NJjT

Two minutes after seeing the Ceres striker leave the pitch, the Burmese kept their hopes alive as Aee Soe sent a shot towards an open goal from the 6-yd box.

In the 86th minute, Ceres centerback Carli de Murga committed a crucial handball error which awarded the home side a penalty.

Sekou Sylla converted the spot kick in the 87th minute, but it proved to be too late for the Burmese to send the game to extra time. – Rappler.com