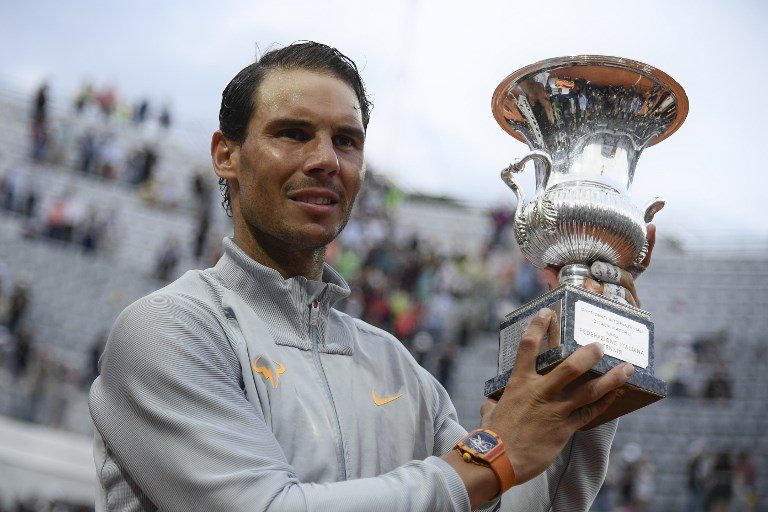 ROME, Italy – Rafael Nadal insisted Sunday, May 20, that his stunning 6-1, 1-6, 6-3 comeback win over Alexander Zverev which delivered an 8th Rome Masters title will have no impact on his campaign to lift an 11th French Open.

German second seed and defending champion Zverev was 3-1 up in the deciding set in Sunday’s final before two rain stoppages halted his momentum at the Foro Italico.

Nadal came back on court re-energized to sweep the final 4 games and claim victory for his 32nd Masters trophy.

Nadal, who will return to the world number one ranking on Monday, May 21, remains the best clay-courter of the Open Era with an astonishing 408-36 record.

He will next seek an 11th French Open crown to match the 11 he already owns from Monte Carlo and Barcelona.

However, the 31-year-old insists that his impeccable clay court credentials will mean little when he heads to Paris for the second major of the season starting next Sunday, May 27.

“Conditions in Paris are completely different. I don’t believe that what happened, even if I lost – even with the victory – creates a big impact about what can happen in Paris,” said the Spaniard.

“But, winning always is winning. And, of course, the victories help more than the losses.”

For Zverev, it was a 5th defeat in 5 meetings with Nadal.

“You are an amazing champion and you proved that today,” said the 21-year-old German who had been on a 13-match winning streak which included back-to-back clay titles in Munich and Madrid.

“You are the greatest clay player of all time, we all saw that. I’m disappointed that my streak is over, but I did lose to Rafa, so maybe it’s OK.”

“There’s nothing I can do about it,” the second seed added. “Next time, I have to find a way to come out better after the rain and play better tennis.”

“He came out way faster and played much more aggressive than I did.”

“(Because of) the fatigue I had over the last few weeks, it took me a very long time to get activated again and to get going. Obviously, it wasn’t enough time.”

Nadal was 3-1 down at the first rain break in the final set but cut the gap on the resumption.

After a further half an hour off court during the second interruption, he came back out firing, winning 4 straight games to wrap up the win on his second match point.

“Of course, we can say that the rain helped me,” Nadal said.

“But really what helped me is that I came back with a clear idea in terms of tactical issues and in terms of decisions that I take after that break.

“Of course, a little bit of luck that I had the break back immediately. That was a big help. And I think I played with the right determination and strategy.” – Rappler.com